Stéphane Dion has barraged Canadians with more than his share of whoppers in his short time as Foreign Affairs Minister in the Trudeau government. It's one thing to triangulate to avoid offending Russia or Saudi Arabia; it's quite another to brag about it as emblematic of a new era of engagement and "responsible conviction" that had been sadly lacking under the Tories.

Rather than take ownership of the Liberal government's decision to proceed with the controversial sale of light armoured vehicles to Saudi Arabia, Mr. Dion and his boss continue to insist they're merely protecting Canada's good name by honouring a signed contract. Their refusal to say whether they would have signed the deal – while doing everything in their power to facilitate it – betrays a fundamental lack of transparency and candour, if not guts.

Now, Mr. Dion would have Canadians believe that his participation in the latest (unsuccessful) round of talks to end Syria's civil war was the result of Canada's renewed policy of engagement with Russia, a repudiation of Stephen "Get-out-of-Ukraine" Harper's confrontational approach toward dealing with President Vladimir Putin. Canada's invitation to join the International Syria Support Group (ISSG), Mr. Dion insists, was "a testimony to engagement over isolation and the strength of Canada's commitment to multilateralism," as if the new policy is already bearing fruit.

That policy apparently involves reneging on the Liberal election promise to enact a Canadian version of the U.S. Magnitsky Act, which would allow sanctions on Russians implicated in gross human-rights violations. Such a law would send a strong message to the world about where Canada stands on the thuggery of Mr. Putin and his business pals toward whistle-blowers. But that's not Mr. Dion's style.

Funny, neither Japan nor Australia stooped to appeasing Mr. Putin to "win" a seat at the ISSG, which met this week in Vienna to advance efforts to end the horrific five-year-old Syrian conflict that has taken (by Ottawa's own estimate) 400,000 lives, abetted the rise of the Islamic State and caused a global refugee crisis that is destabilizing Europe. Canada was just one of four additional countries to join the latest ISSG talks (Spain was the fourth), even though Australia-Russia relations are hardly any warmer than Canada-Russia relations were under Mr. Harper, while Japan is locked in a bitter territorial dispute with Russia over the Kuril Islands.

The addition of new members to the ISSG – the group now includes 22 countries and four international organizations or alliances – was largely the result of attempts by the United Nations to break a deadlock between Russia and the United States, the two countries leading the talks, that has seen negotiations go nowhere since they were launched last year. Since then, Syrian President Bashar al-Assad's forces have regained control over much rebel-held territory thanks to Russian air strikes. The multilateralism of the ISSG is a fig leaf enabling Russia to prolong the war until its own aims have been achieved.

As Brookings Institution scholar and former State Department official Tamara Cofman Wittes told a U.S. Senate committee hearing on Tuesday: "Right now, the Assad government and its patrons in Tehran and Moscow have no interest in a sustained ceasefire, because the battleground dynamics continue to shift in their favour."

Can Mr. Dion's new-found "engagement" with the Russians do much to change that? To ask the question is to answer it. "Everyone agreed that the Assad regime is the lesser evil," Russian Foreign Minister Sergey Lavrov said after Tuesday's talks, adding: "We don't support Assad. We support the fight against terrorism."

Russia's military actions suggest otherwise. While Russia purports to target terrorist groups, its attacks, and those of the Assad regime it facilitates, are directed just as often at non-jihadi opposition forces. Moderate rebels cannot put their faith in a peace talks co-led by Russia as long as Russia continues to tip the scales for Mr. Assad. The Obama administration, meanwhile, lost all leverage by reneging on the threat of military action against the Assad regime in 2013.

Tragically, as it stands, Syria's civil war will not end until Russia decides it should end, and on its terms. The result could be an even more dangerous Middle East, with Syria a satellite of an even more strident Russia and an unimpeded conduit for Iranian arms to Hezbollah in Lebanon.

Mr. Dion may flatter himself with delusions of his own influence. Whether his self-congratulation and ingratiation to Russia flatters Canada's reputation is another matter.

Canada will help deliver humanitarian aid in Syria if ceasefire fails: Dion
May 17, 2016 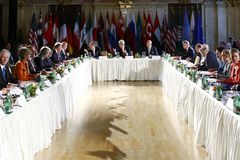