This week, we experienced a fear that has not been felt on such a visceral level since the 1980s, one that sent thousands of people, in Hawaii and then in Japan, fleeing for shelter. False-alarm air-raid sirens were not unheard of in the 1990s and 2000s, but they didn't lead to panics. Today, there is at least some palpable risk of a nuclear conflict, emerging from the shockingly rapid armament of North Korea and the risk that Kim Jong-un or his opponents will launch a war.

There are two fears involved. First is the fear of war – and the possibility that during any conflict or attack a nuclear-tipped missile, however inaccurate, could be lobbed across the Pacific and explode in North America. Second is the fear of peace – the sort of plausible peace in which North Korea's arsenal continues to grow in size and accuracy, its leader maintaining his rule by dangling the possibility of fiery death. We have little information to inform either fear – and that uncertainty engenders an even greater fear.

Do you want hard numbers? Some informed observers have tried to quantify the fear. In October, former CIA chief John Brennan placed the odds of a military conflict in the Korean Peninsula in the near future at 20 per cent to 25 per cent, based on the North Korean and U.S. leaders' aggressive postures weighed against the more cautions positions of the U.S. State Department and the international community.

Then in November, Mark Fitzpatrick, a veteran Korea analyst and non-proliferation official currently with the Washington-based International Institute for Strategic Studies, calculated that the risk of a war in the next year is closer to 50 per cent. He based his assessment on the likelihood (zero) that North Korea will stand down its nuclear program, on the escalating mutual threats and the chance of "mistaken signals that might spark an unintended conflict" and on the "wildly optimistic assumptions [within both Washington's and Pyongyang's militaries] about how the other side will respond."

Other analysts have placed the risk much lower, arguing that nuclear weapons are built and purchased on the rational calculation by leaders (including Mr. Kim) that their entire purpose is to make their use unnecessary, since nobody will dare attack you – and because even limited use of these weapons will end your regime and destroy your country. These analysts, however, do not place the risk at zero.

The risk of a continuing so-called "hot peace" in which nobody really feels safe – that is, the current status quo – is certainly much higher. Turning that peace into a "cold," less immediately threatening peace, and then attempting to provoke a non-catastrophic regime change, is our best hope – but the odds here are also long. This week's Vancouver summit of 20 foreign ministers was part of an incremental effort to further squeeze North Korea through sanctions and isolation. As conflict-management expert Simon Palamar noted, Vancouver was a small but important part of "the building of a unified front." It's an economy-driven approach that worked in the 1990s on the Warsaw Pact countries and in 2015 on Iran's erstwhile nuclear program. Likewise, South Korea's Olympic-themed talks (and symbolic acts of hockey co-operation) with the North are wise; such openings and outlets have been key parts of postauthoritarian transitions.

The fear of a risky peace is closely tied to the fear of a hair-trigger war. North Korea's ballistic-missile arsenal, while still very inaccurate and unpredictable, is now sufficiently big, widely distributed, well hidden and mobile – it has launched medium-range missiles from truck-based launchers. It's developed enough that even an overwhelming and well-targeted strike on North Korea – which would require more than two dozen B-52 bombers to go undetected somehow – would very likely leave at least one nuclear weapon free to be fired into Seoul, possibly killing hundreds of thousands. The price of failure in such a mission would be devastatingly high, but so, likely, would the price of success.

"The complexity, risks and costs of a military strike against North Korea are too high," Barry Posen, the head of the security studies program at the Massachusetts Institute of Technology, concluded recently. "A combination of diplomacy and deterrence, based on the already impressive strength of South Korean and U.S. forces … is a wise alternative."

Diplomacy and deterrence won't lead to a utopian world in which Pyongyang disarms and becomes democratic. But it is our best hope for reducing the fear. 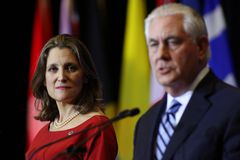 Questions raised over who should handle missile alerts after error in Hawaii
January 17, 2018 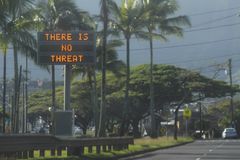