Patrick Luciani is a Senior Fellow of the Global Cities Program at U of T and co-author of XXL: Obesity and the Limits of Shame (2011) U of T Press.

Why are we getting fatter? Why is it so hard to lose weight? Can governments do anything about it? Those are questions my co-author Neil Seeman and I tried to answer two years ago.

We are not obesity or nutritional experts. We were interested in finding answers because we both struggle with our weight and despite the hundreds of diet books on the market, we (and the rest of the world) kept pushing that boulder up the hill just to have it roll down again.

So we put our research skills to use and delved into the medical and economic literature on the subject and came up with XXL: Obesity and the Limits of Shame. What we found gave us a different take on what works and what doesn't.

We discovered pretty quickly that obesity was far more complex than we had imagined, the cause and effect more tangled. We started with the notion that the causes were simple: consume too many calories and you're bound to get fat. From this view, obesity had a basis in a lack of willpower. Yet over the last 30 to 40 years, Canadians, and most of the world, have been getting fatter. Yet this folk theory of obesity has been a poor explainer of modern weigh gain. In other words, external factors are the main drivers of obesity.

And what are these drivers?

Even modern medicine may play a role in driving up obesity. Statins and hypertension medications, for example, have lowered the cost of carrying around more weight.

What we have is an intricate mix of psychological, economic, physiological and sociological factors, almost impossible to unravel. Take the relationship between obesity and income. We know that the poor are more overweight than higher-income earners, but does poverty lead to obesity or does being obese lead to poverty? There is no clear answer and it's an important one if we want to design effective public policy.

This isn't for lack of trying.

It seems that every medical school in the Western world has a department specializing in obesity and we spend a lot trying to find out what makes us fat. In the U.S. alone The National Institutes of Health in the U.S. spends nearly $800-million a year studying obesity's neurological, metabolic and genetic foundations. In Canada, $281-million was spent on obesity research from 2003 to 2013. Over the last decade the number of papers just on the economics of obesity has increased dramatically.

Although science has uncovered complex biological pathways and feedback loops that connect the brain and digestive system – indicating why some groups are more prone to obesity – it may take decades more to understand all of obesity's causes. But the real problem is that we can't do controlled experiments on humans as other natural sciences. We can't make one group of humans obese just to study them.

So what works? Can government programs do much to help? Where the obese were once exclusively seen as creators of their problem, many now argue they are victims of an "obesogenic" environment and need the paternalistic hand of government to save them. That perspective has been reinforced by the American Medical Association's recent decision to classify obesity as a disease, a decision not universally supported.

Defenders of more government intervention include American scholars Cass Sunstein and Richard Thaler, authors of the best-selling book Nudge. They argue that we can steer people away from unhealthy foods in subtle ways such as how we place products in grocery stores. In other words, let's put the cookies on a higher shelf. Similarly, former New York mayor Michael Bloomberg advocated selling sugary sodas in smaller containers. The British government under David Cameron have taken to this idea in a big way by creating a Nudge Unit with the goal of incorporating an understanding of human behaviour into policy initiatives.

Behind these and other programs – taxing soft drinks and junk or fast foods – is the same belief: consumers are incapable of making wise decisions when it comes to their health. Some go beyond the "libertarian paternalism" of Mr. Sunstein and Mr. Thaler.

Philosophy professor Sarah Conly, in her book Against Autonomy: Justifying Coercive Paternalism, makes the case that not only are we too fat, we don't even have the good sense to save enough for retirement. She has little time for freedom of choice or individual autonomy. Ms. Conly argues that when there is an inconsistency between what people want (we want to be healthy), and our behaviour (we eat too much), government must step in for our own good.

The problem is, paternalism – soft or hard – doesn't work even if it can be shown that the causes of obesity are externally driven. Despite all the research on the impact of food– labelling, fat taxes or subsidizing fruits and vegetables, there is no evidence that any of these programs work. Denmark found that out the hard way when it abandoned a failed fat tax program last year. In some cases they have lead to bizarre unintended consequences. In one field study of a small American city where households faced an increase in the price of soft drinks, soda consumption declined but beer consumption increased.

And school programs encouraging kids to exercise more aren't working, nor are trendier financial incentives or over-the-counter weight-loss products that only end up costing consumers a fortune in money and lost hope. Bariatric surgery is a great benefit to the obese, but even there the results aren't miraculous.

So now we turn to governments for help. But in a liberal democracy, the state is almost helpless to the task of battling obesity. Bureaucracies have a way of staying around long after they are of any use. Can anyone say that "ParticiPACTION", a program that's been around since 1972, has had any effect on rising obesity levels in Canada? As far as nudging and soft drink taxes are concerned, the marginal benefits will most likely end up embarrassing their advocates for the little good they do.

If there's anything to be learned it's that weight is a deeply personal challenge that can only be solved one person at a time, and only when we as individuals come to the conclusion that we've had enough. For that to happen, you have to change your life. And no government program can do that for you. 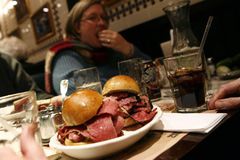