Derek Burney and Fen Osler Hampson
Contributed to The Globe and Mail
Published January 5, 2015 Updated May 12, 2018

Derek H. Burney was Canada's ambassador to the U.S. from 1989-1993. Fen Osler Hampson is a distinguished fellow and director of Global Security at the Centre for International Governance Innovation and Chancellor's Professor at Carleton University.

Foreign policy is rarely a consideration for voters in an election year. But clarity of policy and firmness of position on the key international issues of the day define the essential qualities of leadership. Fuzzy-headed appeals to multilateralism or equally vague notions that the foreign policy enterprise is all about being well-intentioned Boy Scouts won't cut it and will simply consign us to irrelevance on the global stage.

Here are five challenges in the coming year that merit close attention:

1. Delivering real substance from the trilateral summit to be hosted by Canada in late February. This gathering should chart a new strategic vision for North America, notably with an accord on energy security that cuts through the political posturing that has hampered co-operation. Important regulatory and outstanding infrastructure debates should be addressed in a pragmatic and decisive manner. Sensible, continental commitments to reduce greenhouse gas emissions would be a useful complement and a positive catalyst for the pending global dialogue in Paris. A neighbourly consensus on these two issues would improve the tenor of relations generally in North America at a time when there are profound differences and challenges elsewhere in the world.

2. Combatting the challenge from the Islamic State in Iraq and Syria, as well as the global threat from terrorism, will be front and centre soon as the government decides whether to extend Canada's military engagement in Iraq beyond the initial six-month commitment. The government will most likely agree to extend the mission. Given the lack of support from both opposition parties, this issue will present voters with a clear choice.

The Islamic State has been contained but not degraded significantly and certainly not "destroyed." Public enthusiasm for the campaign is on the wane. Ambivalent U.S. leadership and a still-feeble Iraqi government are part of the problem. So, too, are the hesitant, if not duplicitous, actions of key regional players like Turkey and Saudi Arabia that inject additional complexities. For Canada to continue to support this enterprise, a clearer and realistic indication of the overall strategy is needed. For the position of the opposition parties to be more credible, Canadians need to know if playing the role of a passive bystander serves any useful purpose in the Middle East, or against the broader terrorist threat;

3. Confronting and containing Russian President Vladimir Putin's revanchist behaviour against Ukraine and others in the neighbourhood. For one thing, Canada should step up with arms for the beleaguered Ukrainians and urge others in NATO to follow suit. The more Russia's economy falters, the more desperate Mr. Putin will become to focus the minds of his citizens on appeals to the patriotic heart. The threat he poses cannot be ignored or wished away by nostalgic musings about "spheres of influence."

4. Adopting a strategic, not tactical, approach to China by launching broad-gauged trade negotiations. A systematic, long-term engagement with the world's emerging superpower will serve our bilateral and global interests better than an ad hoc approach conditioned by the mood of the moment. Not only would this strengthen Canada's access to the world's largest and fastest-growing market, it would also serve broader trade objectives, including those in the Trans-Pacific Partnership (TPP) and with other prospective bilateral partners. If Barack Obama gets fast-track trade authority approval from Congress, and if the U.S. and Japan resolve their bilateral issues – two big ifs – TPP may get traction. If so, Canada will be obliged to initiate gradual dismantlement of supply management, which, in turn, will benefit consumers and food processors.

5. Much of the above will depend on just how serious the government will be on defence strategy and defence spending in the coming decade. The track record to date is not impressive. Despite major deployments to Afghanistan and Libya, and more modest commitments to Iraq, Canada spends proportionately less than half on defence than Australia, a country that is two-thirds our size.

Our defence strategy is simply too NATO-centric. If we really intend to be a serious player in the Asia-Pacific region, and be taken seriously by others there, we need to be seen to be more committed to security concerns that are top of mind for many in that potentially volatile region. Not a winning proposition for an election campaign to be sure, but a message Canadians need to hear. When it comes to foreign policy, we need to be actively engaged on security and trade alike.

Derek H. Burney and Fen Osler Hampson are the authors of Brave New Canada: Meeting the Challenge of a Changing World.

Opinion
Only a clear strategy should keep Canada in the fight with IS
May 12, 2018 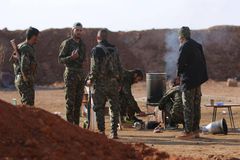 Opinion
Three global myths about the falling price of oil
May 12, 2018