The White House daily press briefings don't normally reveal a heck of a lot. They're of scant use to foreign reporters. If, for example, you're from Canada or what some wag here called the "Great White Waste of Time," your chances of posing a question are minimal.

She can be curt and caustic, but she's a step up from Sean Spicer and fiery flacks like the one reporters uncharitably call Kellyanne Conjob (real name Conway), who coined the term "alternative facts."

Though Ms. Sanders does more dodging than dishing, she will make our day from time to time by showing up with a surprise invitee. The other day it was Rex Tillerson, the Secretary of State who is still in place despite allegedly describing his boss as a "moron." That, along with a host of other blunders that have resulted in his receiving a media pounding of galling proportions.

On his appearance in the cramped briefing room, it was expected that signs of anxiety would be readily apparent on the former ExxonMobil chief. But Mr. Tillerson showed not a trace. He looked like he was just about to settle in for a long nap. What a contrast to the raging king.

Mr. Tillerson was there to announce the designation of North Korea as a state sponsor of terrorism. Right at the outset, he made it clear that he and the President best not be viewed as a diplomatic duo. Of the move against Pyongyang, he said, "I call it the peaceful pressure campaign; the President calls it the maximum pressure campaign." There should be no confusion, he added, half-smiling.

Earlier in the fall, when Mr. Tillerson opened dialogue with the North Korean leader, Mr. Trump chose – team guy that he is – to undercut him, tweeting that he is "wasting his time trying to negotiate with Little Rocket Man." A few weeks later, Mr. Trump contradicted himself, saying that he in fact preferred the negotiation route.

Mr. Tillerson is berated for a helter-skelter foreign policy, but no other Secretary of State has had to cope with a rancorous President who announces foreign policy pivots via tweet-tantrums at the crack of dawn.

The Secretary of State is now under the gun for gutting his department to the tune of a 31-per-cent budget cut. It is not his preference. It is on White House order. And in the era of instant communication, some foreign service paring is indeed in order. But Mr. Tillerson has made a mess of managing the cuts and has failed to fill important ambassadorial posts. As a rookie in Washington, he's inept at working the corridors of power. He's had poor relations with Congress, with the media, with his department.

But something is missing in all the criticism. The Tillerson failures are primarily on the administrative side. Clearly more important is where he stands, in contrast to the President, on the issues. There, he is no T. Rex. Not only on North Korea has he been a voice of restraint. He's pushed to try to save the Iran nuclear deal and for better relations with China. He pushed unsuccessfully for adherence to the Paris accord on climate change. He does not share Mr. Trump's hostility to free-trade agreements like NAFTA and the Trans-Pacific Partnership. In contrast to the President's nationalist proclivities, he's a multilateralist. He is also, by contrast, a long-standing supporter of racial diversity.

Temperamentally, Mr. Tillerson, applauded by Senate Foreign Relations committee chair Bob Corker as a sound strategic thinker, is a necessary Valium-dispensing antidote to Mr. Trump's volatility. One to keep the lid on.

Those who want Mr. Tillerson out might find themselves disappointed. He has strong allies in Chief of Staff John Kelly and in Defence Secretary James Mattis. Reports suggest that the President's son-in-law Jared Kushner, who, embarrassingly for Mr. Tillerson, was put in charge of the Middle East file, has had his responsibilities downgraded.

The adults in the White House are gradually gaining influence. Mr. Tillerson is one of them. For all his foibles, he is a force for keeping American foreign policy on keel.

If he goes and is replaced by someone of the Trump mindset, look out. 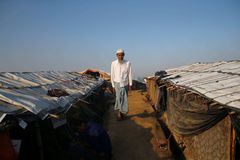 Trump declares North Korea a state sponsor of terror; new sanctions expected
November 20, 2017
Trump offers help as mediator to Asian countries amid China’s expansion into South China Sea
November 12, 2017
Follow us on Twitter @globedebate Opens in a new window
Report an error Editorial code of conduct
Due to technical reasons, we have temporarily removed commenting from our articles. We hope to have this fixed soon. Thank you for your patience. If you are looking to give feedback on our new site, please send it along to feedback@globeandmail.com. If you want to write a letter to the editor, please forward to letters@globeandmail.com.
Comments