Paul Collier is co-director of the Center for the Study of African Economies, Oxford University. Acha Leke is director of McKinsey in Africa.

Nigeria has been getting a lot of bad press lately, owing largely to the militant Islamist group Boko Haram's abduction of more than 200 schoolgirls in April, part of a brutal campaign of kidnappings, bombings, and murder. But, while these developments certainly merit international concern, they should not be allowed to obscure Nigeria's recent achievements – or spur the outside world to turn its back on the country.

What is lost in most discussions about Nigeria today is the strong economic record that it has established over the last decade. In fact, a recent year-long study of the country by the McKinsey Global Institute (MGI) showed that, over the next 15 years, Nigeria has the potential to become a major global economy.

With roughly 170 million inhabitants, Nigeria has Africa's largest population. But it has only recently been acknowledged as having the continent's largest economy – 26th in the world – following the release of "rebased" data putting GDP at $510-billion (U.S.) last year. MGI estimates that, in 2013-2030, Nigeria could expand its economy by more than 6% annually, with its GDP exceeding $1.6-trillion – moving it into the global top 20.

The problem is that Nigeria remains subject to outdated assumptions, which are limiting its prospects, especially among foreign companies and investors. For example, many believe that Nigeria is a petro-economy, wholly at the mercy of the world oil market. But the resources sector accounts for only 14% of GDP – meaning that, while oil production remains a critical source of revenue and exports, the Nigerian economy is far more diverse than many assume.

A related myth is that Nigeria's economic growth is unstable, with large and unpredictable shifts in performance from year to year. In fact, as Nigeria has diversified its economy and detached public-spending plans from current oil prices (part of a 2004 budget reform), it has become increasingly stable, both economically and fiscally.

Finally, there is a general misunderstanding about the Nigerian economy's evolution. Despite widespread poverty and low (though improving) productivity in almost all industries outside of the resources sector, Nigeria has a rapidly growing consumer class that will play an increasingly important role in driving growth. By 2030, more than 34 million households, with about 160 million people, are likely to be earning more than $7,500 annually, making them aspiring consumers. This implies a potential rise in consumption from $388-billion annually to $1.4-trillion.

Nigeria's prospects are enhanced further by its strategic location, a large and growing population and an entrepreneurial spirit. The future looks bright.

In order to unleash this potential and ensure that the next decade of growth brings sharp reductions in poverty, Nigeria's leaders must pursue reforms aimed at increasing productivity, raising incomes, and delivering essential services like health care and education more efficiently.

For example, to increase productivity and incomes in the agricultural sector, the government could pursue land-title reform aimed at opening more farmland without deforestation; expand the use of fertilizer and mechanized equipment; and support a shift to more profitable crops. Moreover, improvements in distribution and marketing would allow farmers to keep more of the proceeds from the sale of their crops.

In urban areas, productivity suffers from a high degree of informal employment, sometimes even by major corporations. This keeps too many Nigerians in low-skill, low-paying jobs and deprives the economy of the dynamism that competitive small and medium-size enterprises create.

To make it easier to do business in Nigeria, the government also will need to streamline processes for registering and running a legal business and, together with aid agencies and the private sector, increase investment in infrastructure. It will also need to intensify its fight against endemic corruption, which represents a tax on all businesses.

Finally, to promote inclusive growth – essential to relieving human suffering and mitigating social and political tensions – Nigeria must improve public-service delivery dramatically. All that is needed to ensure that assistance – from seed subsidies to immunization – reaches those who need it most, regardless of where they live in the country, is a strong commitment from Nigeria's leaders to build more effective and transparent government agencies.

Nigerians do not need sympathy or even outrage from the global community. What they need is support and encouragement. Only with stable and inclusive growth can Nigeria escape the clutches of brutal forces like Boko Haram and give its citizens the security and prosperity that they deserve.

Eleven parents of Nigeria’s kidnapped girls die from attacks and stress
May 11, 2018 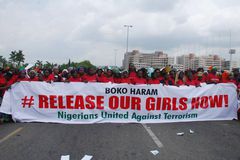