Peter Shawn Taylor is a freelance writer based in Waterloo, Ont.

They may be the 22 loneliest people in Canada. No one, it appears, wants to be seen with our country's current and former prime ministers. Is Canadian history too unpleasant to look at?

But when the city solicited public input, it met a blisteringly negative response. Nearly 80 per cent of the more 2,400 respondents opposed the idea, with the bulk of the comments expressing revulsion at celebrating the "corrupt dead white men" who (mostly) comprise our country's past leadership. Kitchener city council meekly abandoned the concept. When the project's first statue – Sir John A. Macdonald, naturally enough – was completed as scheduled earlier this year, it had to be unveiled at a local hockey game.

The organizers subsequently sought out a more welcoming home for the titans of Canadian politics; the campus of Wilfrid Laurier University in neighbouring Waterloo seemed a logical spot. Following an announcement earlier this month that the school would be the new host for the statuary, however, the response from the university community has proven identical to that of Kitchener. Beyond the predictable component of perpetually outraged students, many prominent politics, history and business professors at Laurier have also spoken out against the statue plan and joined a petition campaign.

"It would be beyond embarrassing to have 22 additional statues of our former and current Prime Ministers – some of whom have been less than exemplary leaders," wrote political scientist Brian Tanguay. "Politically and culturally insensitive," noted business professor Stephen Preece. Other profs claim the mere presence of Macdonald on campus would be an "affront" to native rights.

It has become lamentably fashionable to decry the entirety of Canada's history as an unending series of racist, genocidal and generally insensitive events that bring nothing but embarrassment and shame to our present-day selves. Much of this ire has been directed at Macdonald, amid claims he deliberately plotted the extermination of Prairie natives. But while aggressive repudiation of Canada's past may assuage modern-day sensitivities, this sort of historical self-loathing is not only unbecoming of a university campus, it's also blatantly wrong. Canada's prime ministers are far too complex to be reduced to mere comic-book villains.

Consider the many sides of Macdonald. Yes, the residential school system was inaugurated on his watch. And government policies exacerbated native hunger and starvation on the Prairies following the collapse of the buffalo herds. Yet in 1885 he worked very hard to give all natives the vote in federal elections – hardly the impulse of a genocidal racist. While his plan was ultimately stymied by Liberal opposition, he was able to grant a small percentage of Canadian natives the vote as a matter of principle. What was once called the "Macdonald franchise" was repealed in 1898 by Liberal Sir Wilfrid Laurier. Important stories such as these will be lost if we simply close our eyes to history.

Canada's prime ministers weren't perfect – who is? – but they are important markers of our country's progress through the years. If you approve of Canada circa 2015, you ought to give our past leaders at least some of the credit for getting us here. A statue or two wouldn't hurt either. Opinion
Judge leaders by the standards of their time
January 14, 2015 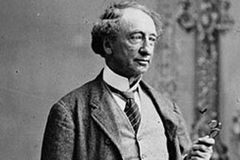