Jeremy Bernstein is a theoretical physicist who writes frequently on nuclear weapons.

In the fall of 1944, a mission was dispatched by the advancing allied armies in Germany to learn about the status of the German nuclear program. It was called Alsos – the Greek word for "grove" – and it had been created by General Leslie Groves, who was in charge of the Manhattan Project that led to the development of the U.S. atomic bomb. Its scientific attaché was the Dutch-American physicist Samuel Goudsmit, who spoke German and had known many of the scientists involved in Germany's nuclear program, including principal scientist Werner Heisenberg.

Ten of the German scientists were rounded up and dispatched to a country estate near Cambridge called Farm Hall, where they spent six months during which time they were recorded. Mr. Goudsmit later wrote a book called Alsos, and one of the conclusions he came to was that part of the reason the Germans failed to complete the bomb was that they lived in a dictatorship where authority was not to be questioned, while the United States succeeded because of the free give and take among scientists at all levels. He claimed that scientific enterprise at this level could not succeed in a dictatorship.

Another person who held the same view was president Harry Truman. After the war, he asked J. Robert Oppenheimer, who led the Los Alamos Laboratory where the bomb was created, how long it would be before the Russians detonated a nuclear weapon. Mr. Oppenheimer said he was not sure, but it would probably be a matter of a few years. Mr. Truman said he was sure: It would be never. Both Mr. Truman and Mr. Goudsmidt were wrong. The Russians successfully tested on Aug. 29, 1949, the Chinese on Oct. 16, 1964, and the North Koreans on Oct. 9, 2006.

Of all of these, the North Korean program – considering the state of the country's population – is the most counterintuitive.

The North Korean program began in 1962. The country tried to get help for its nuclear weapons program from the Russians and Chinese but were turned down, although the Russians agreed to help in the construction of a reactor and to train North Koreans. Indeed, the North Koreans built an indigenous reactor at Yongbyon, which was a reverse-engineered version of a British reactor that had been designed to produce plutonium. In 2010, the American physicist Siegfried Hecker was surprised to discover on a visit that the North Koreans had built a very sophisticated facility to enrich uranium so that now they have both enriched uranium and plutonium to use as bomb fuel. All the North Korean scientific talent is homegrown.

How is this possible given the apparent destitute state of the population? To get a feeling I suggest you search for an obscure presentation available on YouTube from the Institute of Natural Science in Pyongyang. It is in Korean but you will understand enough to get the point. All the students, men and women, are dressed in the same uniforms. They look very attractive and healthy. Hundreds are listening to a lecture in rapt attention. I was not able to figure out the subject. It was given by a woman. I tried to make out the texts. At one point a mathematics paper in English was shown co-authored by a Westerner and a Korean.

Compared with the life of the average North Korean, these students might just as well be living on another planet. Are they content with their lot? Who can say? But it does not take many of them to design a bomb. Pakistan designed its bomb with something like six physicists. The North Koreans have moved very rapidly ahead with their program. There have been five nuclear tests, the last the largest. Supreme Leader Kim Jong-un referred to it as a "hydrogen bomb." It is very likely that it is not what one would call a hydrogen bomb in the usual sense. It is more likely to have been a "boosted" device, which is a mixture of fission and fusion. In photos of the device, it appears to have a spout that would likely be used for the insertion of fusible gas, a technique that would make it small enough to fit into the cone of an intercontinental ballistic missile.

The hands on the Doomsday Clock are rapidly approaching midnight. 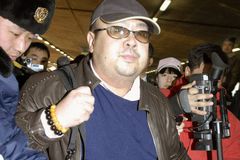