If Premier Greg Selinger loses Manitoba's general election next week, it won't be because of the national aftershocks set off by the Leap Manifesto. It will be because the electorate has lost confidence in the New Democrats after 15 long years in power.

And all indications are that is precisely what will happen.

This will leave Rachel Notley's government in Alberta – Alberta! – as the only one in Canada touting the NDP brand. Prepare now for the onslaught of stories and opinion pieces exploring the degree to which the party is an ever-diminishing political institution.

The acrimony and disarray that engulfed the NDP convention in Edmonton – the demise of leader Tom Mulcair, the embrace of the Leap Manifesto calling for the end of fossil-fuel development in Canada, the angry words from Ms. Notley – naturally led to commentary suggesting that the New Democrats have lost their way and are increasingly at odds with the mainstream of society.

It wasn't the first time that observation has been made about the New Democratic Party, federally at least. Over the years, it has often been accompanied by the claim that the party is in danger of becoming irrelevant provincially as well. Events at the convention last weekend sparked similar chatter: The NDP will always be a captive of ideologues who will one day cause irreparable damage to the party brand and render it a spent force politically. Has that day arrived?

Attempts to tie the failure of the NDP federally to the demise of the party provincially are tenuous, however. Just as it was foolish to suggest that Ms. Notley's victory in Alberta last year portended good things for Mr. Mulcair federally, it is rash to surmise that ineptitude at the national level has created intractable problems for the NDP at provincial levels. (Although provincial wings of the party are certainly capable of shooting themselves in the foot at the most inopportune times.)

In most Canadian elections, there are two options for voters: a centre-right and a centre-left. Parties that hope to govern in this country all have their core supporters on either side of the political spectrum and then chase as many votes in the middle as they can. In terms of policy, party names/brands/labels have, over the years, become increasingly less helpful.

The Liberal Party in British Columbia runs arguably the most conservative provincial government in the country. The New Democrats in Alberta ran on an election platform that wasn't dissimilar in tone and substance to Justin Trudeau's Liberals. The federal Liberals ran on a platform that was far more progressive or left-leaning than the NDP.

Political leaders will always have an outsized role in the outcome of an election, often more so than party doctrine. Ms. Notley was a charismatic figure whose style people gravitated to. Her personality was also in stark contrast to the somewhat stiff, corporate and predictable leaders she was running against. She was the right leader at the right time for her party to make a historic breakthrough.

Just as Mr. Trudeau was for the federal Liberals. Had someone else been leading the Grits into the 2015 federal campaign (Joyce Murray, Martin Cauchon, Martha Hall Findlay or one of the other leadership hopefuls), we might not be having this discussion today – Mr. Mulcair might be prime minister. Yes, he was the victim of some poor strategic policy decisions, but also the object of circumstance or bad timing, however you view it.

There is no question that the New Democrats often need things to break their way to win elections. For example, in British Columbia, where the party has won only three contests in the past 50-plus years, the NDP has needed help from the opposition; that has usually meant a split in the centre-right forces.

It was the same in Alberta: Hostilities between the Progressive Conservatives and Wildrose opened the door to an NDP victory. And what Ms. Notley does with the opportunity she has been given could have a bigger impact on the party's brand nationally than the events happening around the federal leadership.

All of this is to say that the NDP is far from doomed as a political entity.

Its political obituary has been written so many times now, it's almost comical. There is an array of conditions and circumstances that usually determine the party's electoral fate, and the Leap Manifesto is not the ideological death anvil many imagine it to be. 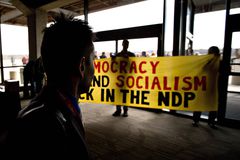 Mulcair says he has caucus support to remain leader until successor named
May 16, 2018 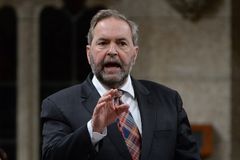 Conservative revival in Manitoba should come as no surprise
May 16, 2018 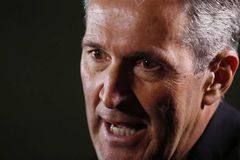