What was otherwise a dull, dull, dull debate for the Ontario PC leadership erupted into an attack by former Toronto councillor Doug Ford on former MPP Christine Elliott Wednesday night, suggesting that each now considers the other the real threat.

"People want to know which Christine they're going to get," he declared, to hoots and applause from some in the audience.

"I don't have anything to apologize to you for," Ms. Elliott retorted, saying her positions were consistent and her appointment was based on merit.

Caroline Mulroney was more often than not silent during open debate, reminding viewers she is a newcomer to such forums, and to politics. Later, however, the businesswoman and lawyer also tussled with Mr. Ford, when Ms. Mulroney criticized him for not reporting abuses he claimed to have witnessed at nomination meetings.

"Caroline, I find it pretty rich for you to say this, a person who got parachuted" into her riding, Mr. Ford shot back, adding, "Maybe we should reopen her nomination."

Things generally deteriorated for a while, until Ms. Elliott reminded everyone "we all have to come together when this is all over." From this vantage point, that moment was typical. If there was one candidate on the stage who successfully projected the message, "I am ready to be premier," it was Ms. Elliott.

For much of the evening, the three leading candidates to become leader of the Progressive Conservative Party of Ontario were interested in protecting their flanks, suggesting a close race that will be won on the ground by the organization that does the best job of getting its supporters to vote, not on the airwaves.

With former leader Patrick Brown no longer in the running, the Tories are locked in a three-way race, with each candidate emphasizing their strengths: experience (Ms. Elliott), a fresh face (Ms. Mulroney) and good-old-boy populism (Mr. Ford). Polls show that the Liberals under Kathleen Wynne's are deeply unpopular, with the Tories having a good shot at winning the next election despite their disunity.

Much of the debate was dominated by Tanya Granic Allen, a social-conservative activist who is a marginal candidate in reality, but who at times acted like a hostile moderator (Althia Raj of Huffington Post was the actual moderator), relentlessly cross-examining the other candidates on her pet issues: changing the province's sex-education curriculum and confronting what she believes is a culture of corruption within the party leadership.

As her tirades dragged on, one began to suspect the other candidates were willing to allow Ms. Allen to dominate the debate, if only to run out the clock.

People who place the environment high on their list of priorities should steer clear of this party. All the candidates repeated their vow not to implement a carbon tax, which had been in the party platform under Mr. Brown, without explaining how they would replace the missing billions it would have provided, other than to cut mythical "waste." Mr. Ford was at least colourful in his evasions, vowing "to sanitize Queen's Park from top to bottom."

There are conflicting indicators of how well the three major candidates are doing. The Mulroney campaign has raised $780,000 – a substantial sum given that the race is a month old – and attendance has been high at some campaign events.

But a Mainstreet poll released Wednesday showed Mr. Ford and Ms. Elliott essentially tied in support, with Ms. Mulroney well back. That poll, however, should be handled gingerly. Mainstreet notoriously misforecast the Calgary mayoral race last year. Polling of party members can be especially difficult, given that we don't know who and how many will actually register and then vote. In any case, the candidate with the most second-choice support is likely to prevail.

This contest is going to boil down to which operation is able to persuade its supporters to cast an online ballot before voting ends March 8. Even with the occasional dust-up, Wednesday's debate probably changed little, even if it was occasionally fun to watch. 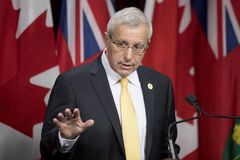 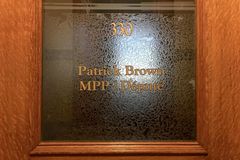