It looks like Canada’s COVID-19 pandemic will be a three-period game. Things are now moving into the second period, and they are not going well. We are surviving, but hardly winning.

Like Team Canada facing the Soviets in the 1972 series, we took to the ice unprepared and overconfident. At first, things seemed to be in our favour. Even as Europe and New York struggled with exploding case numbers that overwhelmed hospitals, Canada initially saw few infections and deaths.

Then we discovered we had no reason for pride. Smugness cometh before the fall.

Some provinces did well, notably British Columbia and those in Atlantic Canada. But the loss of life was high in Ontario and catastrophic in Quebec; the COVID-19 death rate in that province was higher than in Italy, Spain or the United States.

After thousands of deaths, millions thrown out of work, and billions of dollars borrowed to support them, the first wave was over. But Canada did not take advantage of the summer intermission to prepare for the rest of the game.

Early in the second coronavirus period, the country is paying the price for complacency.

On the plus side, there’s light at the end of the tunnel. Vaccines are coming. In the long run, Canada is going to beat the pandemic. Normal life is going to return.

But that’s not going to happen for many months. Between then and now, there’s a lot of time on the pandemic clock. There’s probably another period coming, and maybe overtime, too. There are a lot of lives to be lost, or saved.

We’re still early in the second period. Having failed to properly prepare, Canada has no choice but to play defence.

On Friday, Ontario’s Doug Ford government announced it was sending Toronto and neighbouring Peel Region, together home to half of the Greater Toronto Area’s seven million people, into lockdown. The rest of the GTA, plus Hamilton and Waterloo, are in the slightly less restrictive “red” stage.

Ontario is, for the moment, recording lower COVID-19 case counts than other hard-hit provinces. Ontario reported 1,418 new infections on Friday – but Manitoba, with a lockdown in place, announced 438, which adjusted for population is equal to more than 4,500 cases in Ontario. Alberta, with looser restrictions, on Friday revealed the Ontario-equivalent of 3,900 cases. Although Ontario’s testing capacity is inadequate – one of the signs of Canada’s failure to prepare for the second wave – other provinces are testing even less. In the week ended Friday, Ontario averaged around 36,000 tests a day, well below the testing capacity of 50,000 it supposedly had months ago, and even further behind its target of 100,000 tests a day by December.

In mid-September, the federal government said it would provide billions of dollars to ramp up daily testing to 200,000; at the time, Chief Public Health Officer Theresa Tam said the country’s capacity was about 60,000 tests a day. Two months later, that’s roughly where testing still sits.

The country’s lack of testing and contact tracing, as this page has noted time and again, means Canada is to some extent flying blind when it comes to knowing who is infected, who they got it from, and even how many infections there are. Each province’s official daily case number is not the true tally of infections. It is merely the number found by (inadequate) testing.

Canada went into the game wearing a blindfold, and we never fully removed it. We’re like a sharpshooter with astigmatism, trying to hit a target we can’t see while planning to get prescription glasses, eventually.

All of which is why the latest moves to scale back human contact, close businesses and ramp up physical distancing, from Quebec to B.C., are necessary. If Canada had better prepared to find cases, trace cases and support and isolate the infected, we likely would have been able to afford less stringent lockdown measures.

Maybe we’ll be ready for the third pandemic period, next spring. But over the next few weeks, the only way of avoiding the high death rates being seen in Europe and the U.S. is through the blunt instrument of lockdown or near-lockdown.

They say those who fail to learn from history are doomed to repeat it. We learned from the spring, but did not take full advantage of our learning. Hence this unhappy sequel.

Opinion
How Toronto can turn University Avenue into Canada’s most innovative park
November 21, 2020 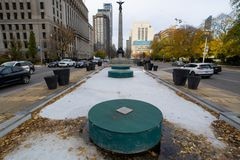