The Editorial Board
Published April 1, 2021 Updated April 1, 2021
Comments
Text Size
Please log in to listen to this story. Also available in French and Mandarin. Log In Create Free Account

It can fairly be argued that there are not a lot of success stories to tell in Canada’s fight against COVID-19. (Except for Atlantic Canada. Can we put Nova Scotia in charge of the country yet?) It’s mostly been a saga of provinces imposing lockdowns that flatten the curve, and then relaxing them the moment they see an inch of daylight.

Ontario did just that in March, after a post-Christmas stay-at-home order in the hardest hit parts of the province, combined with non-essential business shutdowns, reduced daily new cases to below 1,000. Two weeks ago, the province allowed outdoor dining to resume in Toronto and other locked-down regions, and said hair salons and gyms would reopen on April 12.

On Thursday, that came to a screeching halt. Rapidly rising case counts forced Premier Doug Ford to yank the emergency COVID-19 handbrake that sits on his desk. Bye-bye patios.

Same thing in Quebec and British Columbia, where officials this week reclosed some of their reopenings, and expanded restrictions to new regions.

No, these are not success stories. But there is one area where Canada can claim an unmitigated triumph – the decision last year to give the first available vaccines to seniors in long-term care.

In the first two waves of the pandemic, LTC residents did as much as 80 per cent of the dying. The goal of targeting them for most of the early vaccines was to stem the tide of infection and death.

The strategy succeeded, and how. Ontario, for instance, hasn’t recorded a COVID-19 death in a long-term care residence since March 17.

The lesson is that targeted vaccinations work. Which is why now, in the third wave of the pandemic, the provinces should start aiming their needles at the arms of the people at highest risk of becoming infected and spreading the disease. Break the chains of transmission by giving vaccination priority to people and communities that are, through no fault of their own, superspreaders.

Up to now, the provinces have largely prioritized people in descending order of age, a plan laid out by Ottawa.

A new phase is supposed to start some time this month in most provinces. It calls for vaccines to be expanded to frontline health care workers and workers in essential jobs, based on an expected increase in vaccine availability.

It means that Canada has the beginnings of a framework to better target its jabs. With upwards of a million doses a week coming in April and May, and at least two million a week in June, now is the time for that to happen.

Public-health experts are already questioning the wisdom of continuing to prioritize people mostly by age, when there clearly are other groups much more at risk of becoming infected and spreading the disease – especially the highly transmissible and dangerous variants of concern that are putting younger people in hospital.

The Ontario Science Advisory Table put it in black and white in its latest report, released Thursday: “Vaccination is not reaching the highest risk communities, delaying its impact as an effective strategy.”

Those high-risk communities include essential workers in health care, grocery stores, pharmacies, factories and warehouses, and the neighbourhoods they live in.

The Science Advisory Table found that essential workers in Toronto and Peel Region, a Toronto suburb that is home to hundreds of warehouses, factories and distribution centres, are bearing the brunt of new infections caused by the variants of concern, and are driving community transmission.

A study from Simon Fraser University came to the same conclusion about B.C.’s infections.

Should a chartered accountant who works from home and is aged 55, the current minimum age for getting a jab at an Ontario or B.C. pharmacy, be vaccinated before a 35-year-old warehouse worker or grocery clerk who comes into contact with hundreds of other people every day, and rides mass transit to work?

If Canada wants April to be the last ride on the lockdown roller coaster, we have to start focusing far more vaccinations on workplaces and neighbourhoods with high infection rates. Every vaccination helps to break the chain of community transmission and protects people of all ages. That’s why it’s time to prioritize vaccines for essential workers, as LTC residents once were. 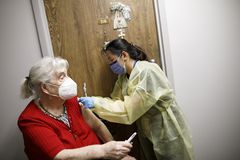 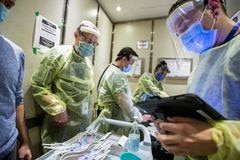