The Editorial Board
Published June 12, 2020 Updated June 12, 2020
Comments
Please log in to listen to this story. Also available in French and Mandarin. Log In Create Free Account

Twenty-six seconds after four RCMP officers approached Robert Dziekanski at Vancouver International Airport in 2007, they began tasering him into unconsciousness. Justice Thomas Braidwood described those 26 seconds, with great understatement, as “a surprisingly short period of time to make initial contact, establish communication, make a risk assessment, conclude that force was necessary, and conclude that no lesser force option was appropriate.”

Twenty-one seconds after two Toronto police officers entered the hallway of Andrew Loku’s apartment building, and saw him holding a hammer, the lead officer began shooting. At a 2017 coroner’s inquest, the officer was asked: “You spent 21 seconds doing nothing but screaming at Mr. Loku to drop his hammer. Do you agree with that?” The officer agreed.

Police in Canada are often sent into dangerous situations, where they are faced with people who are armed and a threat to life. They sometimes must use force, and sometimes it must be deadly force.

But Canadian police are far more often asked to resolve situations involving people who are not a deadly threat, or any kind of threat. (Toronto police fired their guns in just three incidents in 2018.) As a society, we have to insist that, in most situations, the police do not use deadly force, or any force at all.

The best way to make that happen may be to send somebody other than a police officer. Sometimes, a person carrying weapons should be the first responder. But sometimes, they should be the last call.

At the inquiry into Mr. Dziekanski’s death, two police use-of-force experts described the officers’ actions as good policing; one wrote that it represented “a reasonable escalation and de-escalation of force,” and was consistent with “RCMP policy and training.” As a result, though Justice Braidwood criticized the individual officers, he said he was “equally critical of the policy and training paradigm that fosters such poor decision-making.” He suggested that the problem might be, to use that much-overused term, systemic.

Of all the people who came into contact with Mr. Dziekanski over the course of many hours in the Vancouver airport – including several who approached him without fear – why were the police the ones least capable of accurately reading the situation? Why can Mr. Loku’s unarmed neighbours be seen on video interacting with him, only seconds before police arrived and shot him?

Which brings us to “Defund the Police.” Yes, the slogan is terrible, and it encourages an us-vs.-them dynamic, insinuating that “we” the public finally get to really stick it to “them,” the cops. Also: It’s an American slogan, and Canada’s problems, though related, are different in nature and scale. As noted earlier this week, the number of people who die at the hands of police in Canada each year is around 26; in the U.S., it is more than 1,300.

But reasonable advocates for “defunding” the police usually start by explaining that they don’t actually want to defund the police. They want to spend somewhat less on policing, and somewhat more on social services. Which is not unreasonable. Even better: Just spend more on those other services, particularly mental health. Police are called to fill the mental-health gaps when there is no one else to call.

Former Supreme Court justice Frank Iacobucci, in his inquiry after the death of Sammy Yatim at the hands of the Toronto Police Service, said that the “most distressing” realization for him was that the issue was bigger than the police. “The effective functioning of the mental health system is essential as a means of preventing people from finding themselves in crisis in the first place,” he wrote, but “the basic and glaring fact is that the TPS alone cannot provide a complete answer to lethal outcomes involving people in crisis.”

There are many situations in which only police can provide the peace, order and good government every Canadian wants, which is why all Canadians need to know they’re served by fair, impartial and unbiased officers.

But public safety is always about more than just police. As the Peel Principles of Policing put it, “the test of police efficiency is the absence of crime and disorder, not the visible evidence of police action in dealing with them.”

Rethinking Canadian policing to make it so that police are not always the first call, but in many situations, the last resort? It’s a good idea. 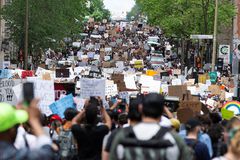