It was hard to imagine that Russia’s utterly discredited anti-doping agency, RUSADA, might sink to a new low, and yet here we are.

RUSADA was exposed in 2016 as the central cog in a state-organized cover-up of doping by Russian athletes. Where it was supposed to enforce compliance, it instead tampered with urine samples in an elaborate scheme to hide the use of banned substances and bring glory to the Putin regime at the Olympics and other international sporting events.

The World Anti-doping Agency responded by declaring RUSADA to be non-compliant, and by banning Russian officials and the country’s flag and anthem from the 2018 Winter Games in South Korea. Russians were allowed to compete as “Olympic Athletes from Russia” if they proved they weren’t part of the doping scheme.

But WADA also gave RUSADA another chance, allowing it to be reinstated if it provided computer data from its main Moscow lab, among other conditions.

So what did RUSADA do? It tampered with the data it was asked to provide.

According to a statement from WADA released Monday, “some data were removed, others altered and, in some cases, system messages were fabricated in an effort to hamper the work of WADA investigators. In addition, measures were taken to conceal these manipulations by back-dating of computer systems and data files in an attempt to make it appear that the Moscow data had been in their current state since 2015.”

WADA is now in the position of a high-school teacher who catches a student cheating on a final exam, punishes him, but then generously allows the student to take an additional test in the interests of education. And the kid cheats. Again.

What should the consequence of a second offence be? In WADA’s opinion, it’s the same punishment as before.

On Monday, it declared RUSADA non-compliant for four years and banned Russian government officials, as well as those running amateur athletic organizations, from participating in international sporting events for the same period of time. The ban starts on the day the decision becomes final; RUSADA has 21 days to appeal and is expected to do so.

A ban would mean the Russian flag won’t be flying at the summer Olympics in Tokyo next year, at the Winter Games in China in 2022, and at the FIFA World Cup in Qatar in 2022. But, as before, Russians who meet WADA’s conditions will be able to compete as unaffiliated athletes.

WADA says it has responded “in the strongest possible terms." No, it hasn’t. It’s hard to see how repeating a punishment that didn’t produce a change in behaviour last time will have a different result this time.

One organization that supports drug-free athletes, and which is run by a former WADA official, accused the drug watchdog of bowing to the wishes of the International Olympic Committee.

“If there has ever been a time to press the WADA reset button to start over, it is now,” Global Athlete said. “It is clear to athletes and the public that WADA is prioritizing the interests of the IOC.”

The head of the U.S. Anti-Doping Agency called the partial ban "a horrendous Groundhog Day of Russian corruption and domination.”

Those criticisms are justified. At the 2018 Winter Games, 168 Russians competed as allegedly unaffiliated athletes, winning 17 medals.

But how unaffiliated were they? They posed for a photo with Russian President Vladimir Putin before the games, and the medal winners did the same with Prime Minister Dmitry Medvedev afterwards. The Russian state – the hand behind the RUSADA fraud – was still able to bask in the reflected glory of its Olympians.

There’s an understandable desire to allow Russian athletes who don’t appear to be part of their country’s nationalized doping racket to compete.

But the previous Winter Games proved that a limited ban is not enough. In Pyeongchang in 2018, the athletes of banned Team Russia simply became members of Team Russian-with-an-asterisk. It made little difference to Moscow.

As tough as it may be, WADA will have to ban all Russians – officials and athletes alike – if it wants to get the attention of the Putin government. More to the point, it needs to do so in order to demonstrate that it understands the problem, and knows how to fix it.

Globe editorial: The World Anti-Doping Agency has disgraced itself
September 24, 2018 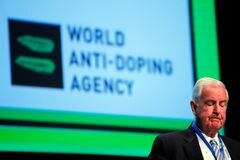