There are any number of reasons to be anxious and angry about the targeted killing of Iran’s highest-ranking military commander by the United States last Friday.

Among the most pressing is that the Trump Administration has not provided evidence to justify the drone strike on General Qassem Soleimani in Baghdad.

The U.S. Department of Defense says Gen. Soleimani was behind several recent deadly attacks on American interests in Iraq, and that he “was actively developing plans” for more, including attacks on diplomats. But so far, there is no proof that an Iranian threat was imminent.

The lack of justification is exacerbated by reports that the option to target Gen. Soleimani was offered to President Donald Trump as a last resort, and that none of his top military advisers expected him to use such an extreme measure.

But Mr. Trump, angered and embarrassed by the Iran-orchestrated attack on the U.S. embassy in Baghdad last week, chose that irreversible option – to the shock of many in the Pentagon.

That raises the possibility the decision to kill the second-most powerful person in Iran was impulsive and didn’t weigh all the risks of a potentially cataclysmic act.

Finding themselves on the defensive, Mr. Trump and his advisers now argue that killing Gen. Soleimani will deter unspecified Iran-backed attacks on U.S. targets in the region.

Few dispute that Gen. Soleimani was a “bad guy," as U.S. Secretary of State Mike Pompeo called him, and capable of carrying out new atrocities. But the deterrence argument is belied by the U.S. government’s immediate decision to dispatch 3,000 more troops to the Middle East as a show of force.

And at Gen. Soleimani’s funeral in Tehran on Monday, the Iranian leader, Ayatollah Ali Khamenei, vowed revenge. It seems certain that Iran will strike back; in fact, it may have little choice, given that millions of the regime’s supporters are calling for retaliation.

It’s also impossible to ignore the astonishing fact that Mr. Trump ordered the death of a high-ranking official of another country.

It’s one thing for the White House to target and kill non-state actors, such as terrorists – something former president Barack Obama did repeatedly in office. But it is another entirely to take out someone of the highest rank in another government.

In short, an attack purportedly carried out to deter violence will increase its likelihood and put more American soldiers and civilians in harm’s way in the Middle East.

As well, the anger it has caused could increase Iran’s influence in Iraq and further destabilize the region. It came to light on Monday that Gen. Soleimani was serving as a critical back-channel emissary between Saudi Arabia and Iran in those two antagonists’ efforts to reduce tensions and avoid war. Now he’s dead.

Perhaps worst of all, the Baghdad attack opens the door to the final breakdown of whatever remains of the morality that once prevented U.S. presidents from openly and boastfully assassinating the officials of another country. The killing of Gen. Soleimani is an outrageous act committed by an amoral President.

But what the killing will not do is lead to a major conflict between Iran and the United States. There will be no Third World War, as some have worried.

Iran knows it is no match for the U.S. military; in most of its responses to the killing of Gen. Soleimani, it has kept open the possibility of dialogue.

That includes the question of nuclear weapons. Iran said Sunday it will no longer abide by the 2015 agreement limiting the amount of uranium it can enrich. But it also said it will continue to allow international monitoring of its activities and has no plans to immediately fire up its centrifuges.

There is room for a peaceful resolution of Mr. Trump’s unprecedented escalation of aggression. Iran still wants the sanctions imposed on it by the U.S. to be lifted, and the U.S. still wants Iran to scale back its nuclear program and end its aggression in the Middle East. They have things to talk about.

Much, of course, will depend on Mr. Trump. He has vowed to bomb Iranian cultural sites in response to any tit-for-tat retaliation from Tehran – further proof of his lack of a moral compass, and of the fact the world is considerably less safe while he remains in office. 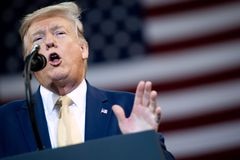 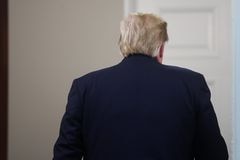