The televised impeachment hearings that began this week in Washington have quickly escalated the stakes in the fight to remove President Donald Trump from office. Put another way, things just got real.

On one side, the Democrats have started a process they can’t back away from. They need to see it through to articles of impeachment that will be tried in the Senate. The failure to go that far will make them a political laughingstock, especially in the damp wake of the Mueller investigation.

On the other side, Republicans have to hope that the live testimony won’t be so damaging to Mr. Trump that he will lose support among voters, to the point that Republican senators will have no choice but to vote to convict the President.

The deciding factor – the thing that could destroy the presidency of a businessman who rose to international fame as a reality TV star – will be how Americans react to what they see on their televisions.

The first day of testimony on Wednesday saw the Democrats present compelling evidence that Mr. Trump threatened to withhold US$400-million in military aid from Ukraine unless its President made a statement saying his government was investigating alleged corruption by Joe Biden and his son Hunter.

William Taylor, the acting U.S. ambassador to Ukraine, reiterated the testimony he gave to impeachment investigators last month, to the effect that the Ukrainians were well aware that receiving critical military aid was dependent on them opening a bogus corruption investigation into the American politician most likely to beat Mr. Trump in the 2020 election.

They were aware of it, because that quid pro quo had been presented to them through an “irregular channel” involving Mr. Trump’s lawyer, Rudolph Giuliani, and Gordon Sondland, the U.S. ambassador to the European Union, among others.

Mr. Taylor also testified that one of his staff members overheard a phone conversation between Mr. Sondland and the President, in which Mr. Trump made it clear he was more concerned about the investigation into the Bidens than he was about the fate of Ukraine, which is engaged in a bloody conflict with Moscow-backed forces on its eastern border.

Another witness, a State Department official named George Kent, said there was no evidence “whatsoever” that the Bidens had engaged in corrupt behaviour in Ukraine. He also said the backdoor meddling by Mr. Giuliani and others was harmful to U.S. diplomatic efforts in that country.

Their combined testimony added to the growing evidence that Mr. Trump withheld financial aid in order to impel a foreign government to investigate a domestic political opponent for personal gain. On Wednesday, the Democratic House Leader, Nancy Pelosi, said Mr. Trump’s actions amounted to “bribery,” which along with treason and “other high crimes and misdemeanours” is an impeachable offence under the U.S. Constitution.

So far, the Republicans, Mr. Trump included, have been unable to provide any counterevidence. Their defence strategy has instead involved calling the impeachment hearings a “hoax," attacking the integrity of witnesses, and relying on the hope that enough Americans will refuse to open their eyes to what is happening.

So far, so good. Mr. Trump is riding a strong economy and he successfully dodged allegations that people in his election campaign colluded with the Russian election meddling of 2016. He has momentum behind him, as well as almost all the Republicans in Congress.

But there are at least three more days of testimony coming, Friday included, and all of it will further erode Mr. Trump’s claim that his dealings with Ukraine were on the up-and-up.

It is self-evident, to those who want to see it, that the President tried to use American tax dollars to sway a foreign power into doing something that would have amounted to meddling in the 2020 election. If it wasn’t bribery, it was certainly an attempt at it.

The key question now is whether his supporters, who are loyal in the extreme, will allow themselves to look at the evidence and, if so, let it change their minds. If they do, Republicans could vote to remove the President from office.

It’s a long shot, and a dangerous gamble on the part of the Democrats. If his supporters stick by him, Mr. Trump will emerge more powerful than ever, emboldened by a party and base that will let him get away with anything. 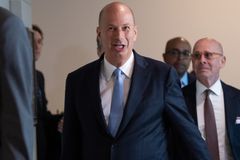 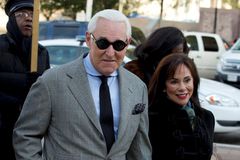 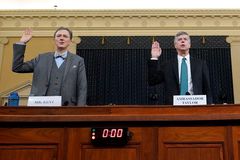