The labour dispute between Ontario’s powerful teachers’ unions and the Progressive Conservative government of Premier Doug Ford has been a topsy-turvy affair.

For most of its duration – months of rotating job actions, and several one-day general strikes that closed every public school in the province – the unions have been able to position themselves as the defenders of education, and the government as a malign force.

And who cast the unions as protectors of the public interest? Step forward, Ford government. This is all playing out according to a script it wrote. Author, author!

Mr. Ford and his education ministers – he has gone through two in less than two years – barely merit a passing grade on this file.

Mr. Ford has in past called union leaders “thugs," and made it clear his priority is to stand up to labour organizations that have long been allies of Ontario’s Liberal Party, and the natural enemy of any PC government. Fair enough.

But at the same time as it was negotiating with teachers over salaries and benefits, the Ford government introduced a plan to increase the average high school class size to 28 students from 22, while also requiring students to take two courses online, rather than in a classroom.

The government wanted to position all of this as a fight against the unions, but Ontarians were, understandably, more interested in what these other abrupt changes to the education system would mean for their children and public schools.

As no one needs reminding, this is not exactly a government that has developed a reputation for prudent management of complex files – or even non-complex files, such as purchasing licence plates that are visible at night.

When the people who botched the redesign of licence plates decided to redesign the education system, who were their chief opponents? The teachers’ unions. The Ford government cast them in the role and they embraced the part.

This same Ford government that came into office insisting the province was in a fiscal crisis also somehow repeatedly found money to reverse a series of ill-considered and unpopular cutbacks.

All of which made it easy for the unions to portray their strikes as being about protecting the school system from unjustified PC cutbacks. A much reported-on poll taken in mid-January showed that parents sided with the unions by a margin of nearly two to one.

Last week, the government finally sent the script to rewrite. As is its habit, the Ford government has backed off. It now says it will only increase the average high school class to 23 students from 22. Students also will be able to opt out of online courses.

That leaves the unions’ demands for a 2-per-cent pay increase. The government is offering 1 per cent.

As of Tuesday, however, at least one union was planning to continue its rotating strikes after the March break, if no deal is reached. An official for the Elementary Teachers’ Federation of Ontario said they won’t stop until the government restores $200-million in funding for special needs, again playing themselves as the province’s lone defenders of schoolchildren.

So were the concessions a smart move? The government’s defenders say Mr. Ford has called the teachers’ bluff and exposed them as more dedicated to their pocketbooks than the needs of students. It’s more apt to say that Mr. Ford spent months playing the wrong hand in the wrong game at the wrong table. He promised to stand up to the teachers’ unions, but his government at the same time was trying to hastily remake the education system. Voters were more focused on the latter.

Yes, decisions about the funding of public schools are supposed to be up to the elected government, not the unions. It’s the job of elected officials to set and implement education policies, and they answer to voters if they get it wrong.

The teachers’ unions serve their members’ interests – that’s their job – and it isn’t their place to negotiate what’s good and bad for education. Yet Mr. Ford effectively handed them that power.

Ontarians need a government that, when necessary, can stand up to the teachers’ unions. It also needs a government with serious plans for improving education. So far, Team Ford is batting 0-for-2.

Ontario elementary teachers to resume strikes if they don’t get a deal
March 9, 2020 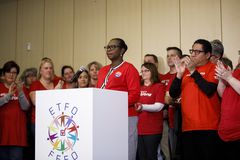