The Minneapolis police force’s first statement on the death of George Floyd came in an e-mail to journalists, with the subject line: “Man dies after medical incident during police interaction.” It said that a suspected forger had “physically resisted,” and after he was detained “he appeared to be suffering medical distress.”

That’s one way to describe what happened. Another, more accurate description came from video shot by a bystander. Absent that video, all might have been written off as a routine arrest, followed by an accident. Nothing to see here, move along.

There are several major steps that should be taken to improve policing in Canada. The first of them has to do with one of the key lessons of the Floyd case.

Put cameras on all police: This page has been calling for that for years. Front-line officers in Calgary are all wearing cameras; in most of the rest of the country, however, the issue was studied, and then nothing happened. It’s time for something to happen.

From the beating of Rodney King in Los Angeles to the death of Robert Dziekanski at Vancouver International Airport, cameras have revealed wrongdoing that otherwise would have remained hidden. And when there is no video evidence, many people will view that absence as itself evidence of wrongdoing.

Take the case of Regis Korchinski-Paquet, whose death happened just two days after Mr. Floyd’s. The Black Toronto woman’s family called police; some time after they arrived, she fell from her apartment balcony. The officers on scene were not wearing cameras, and the lack of video to show what police did, or did not do, has undermined public confidence. If those officers had been wearing cameras, there would be proof of whether the police did something wrong, or are blameless. Canadians would know if this incident bears any relation to the Floyd case, or none at all.

Toronto, after years of foot-dragging, now wants cameras on all officers. The rest of Canada should do likewise.

Disarm the police: In the United Kingdom, the country that invented modern policing, 95 per cent of police officers do not carry firearms. What’s more, most don’t want to. A 2017 survey of police officers found that, while more than three-quarters want a body-mounted camera, two-thirds don’t want a gun.

In a recent interview with The Globe and Mail, Senator Murray Sinclair talked about a case he heard when he was a judge. Police confronted an Indigenous man with a knife, and one of the officers, rather than shooting the suspect, tried to block his movements. Mr. Sinclair praised that officer, but later learned he’d been disciplined for his actions. “That told me,” Mr. Sinclair said, “that the people who were training him had no understanding of how to de-escalate a situation.”

In Britain, police must practice de-escalation and minimal use of force, because it may take a few minutes for armed officers to be called in. As a result, police there shoot at other human beings an average of just six times a year.

In the United States, in contrast, more than 1,300 people die each year at the hands of police, including more than 1,000 shot dead.

Canadian figures are much lower. According to data compiled by CBC News, an average of about 26 people a year died at the hands of Canadian police between 2000 and 2017, nearly three-quarters from gunshots. (Almost all of those killed, according to police reports, were armed.) Relative to population, U.S. police use deadly force at more than five times the rate of Canadian police, including shooting to death at nearly six times the Canadian rate.

Canada, in other words, is not the United States. But our record is far from perfect. We can do better.

Adopting the British policing model, with most officers not carrying firearms, makes sense. Under that model, Sammy Yatim, who had a violent mental-health episode on a Toronto streetcar in 2013 and was shot dead, might be alive now, and in treatment.

The good news is that the average Canadian police officer already goes an entire career without ever firing their weapon. In 2018, police in Toronto shot at human beings on only three occasions. Moving to the British system would not be difficult.

So what about defunding the police, as many are calling for? The answer, later this week. 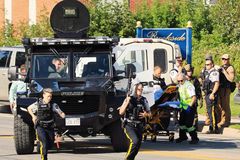 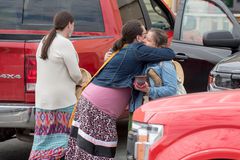 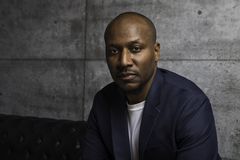