In 1962, less than six decades after the invention of powered flight, 18 years after a German V-2 rocket became the first human object to reach outer space, and only months since the Soviet Union had sent a man into orbit, President John F. Kennedy announced: “We choose to go to the moon.”

It was at least in part a vanity project, albeit the most audacious and exciting in history. It called for unparalleled human intelligence, which sparked invention and ingenuity, and left them as its legacy.

But the future has a habit of never quite turning out as planned. When President Kennedy made his pledge, the race to the moon was the future. Once reached, it quickly became the past. The Apollo project conquered and then quietly expired, dying intestate.

A year before Neil Armstrong declared, “The Eagle has landed,” moviegoers were transfixed by 2001: A Space Odyssey, and its visions of moon bases and orbiting space stations, where you could stay at a Hilton hotel after arriving on a Pan Am rocket. Apollo 11 was surely to be the first, small step in mankind’s giant leap into space.

The future, however, has not been about ever bigger rockets, but increasingly smaller electronics. The Machine Age did not give way to a new age of even larger machines. At the start of the recent documentary Apollo 11, the Saturn V rocket is moved to its landing pad by a breathtakingly gargantuan tracked vehicle, the 6,000,000-pound crawler-transporter, still the largest self-powered vehicle in the world. The scene is awe-inspiring. Nobody watching today says, gosh, imagine when this was unusual.

Rocket technology has also barely changed in the last 50 years. Ditto the internal-combustion engines in our cars and the roads they drive on, the power plants electrifying our cities, the pipes carrying water to our homes and waste out and the design and speed – not supersonic – of our airliners.

A lot of physical stuff in the early 21st century looks nothing like 2001. It still looks rather a lot like 1969.

Where radical and rapid change has come is in computing. That smartphone in your pocket has more computing power than NASA had to guide Apollo 11. We may have no colonies on Mars, but you can access the entire storehouse of human knowledge and experience, including just about anything ever written, recorded, photographed or filmed, whether brilliant, banal or vulgar, from a hand-held device costing less than a 1969 television.

On the landing craft’s descent to the lunar surface, the on-board computer repeatedly crashed. The cause was human error; Buzz Aldrin basically forced it to run too many apps at the same time. But the computer rebooted itself and did much of the work of piloting to a safe landing. Computing is probably the biggest legacy of the Apollo program. In addition to all the marvels and distractions of the information age, even our machines now depend on the computers inside them. Like the Eagle, jet airliners are now mostly flown by their software.

“Here men from the planet Earth first set foot upon the Moon, July 1969 A.D.,” reads the plaque that Apollo 11 left behind. “We came in peace for all mankind.”

They may have come in all our names, but one country sent them there. It was the peak of the American Century. The United States of America saw itself as the incarnation of the Whig theory of history; the land of ever-onward and upward, the country that thought it could do anything and where anything was possible. Vietnam, stagflation and all that followed did that in.

Today’s “Make America Great Again” hats bookend that moment, as markers of insecurity staring back, uncomprehending, at a time of confidence. Our Eagle has not yet landed, and we are still experiencing the effects of weightlessness.

Getting to the moon was human intelligence at its highest. But the impulse to go came from somewhere lower in the brain stem. In his speech announcing the moon race, President Kennedy said that people would wonder: Why? He invoked the urge to discover and to do what has not been done, and the eternal drive to compete and win.

He closed with a quote from British explorer George Mallory. When asked why he wanted to be the first to climb Mount Everest, he offered the most human answer: “Because it is there.” 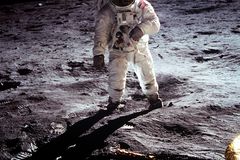 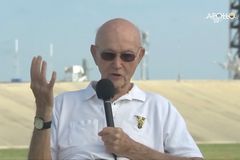