It felt ironic when the mayor of Victoria said this week that a local statue of John A. Macdonald served as a “painful reminder” of colonialism – coming as it did from the civic leader of a place proudly named after a monarch who painted the world map red.

The emotional impact of the bronze likeness on some of the people who regularly passed by it is no doubt real. On the subject of Indigenous people, Macdonald’s views and actions were bigoted by any modern standard.

But the mayor’s remark suggested the sort of selective reckoning with Canada’s past that often mars these increasingly frequent debates about how and whether to honour complicated historical figures.

As British Columbia’s capital prepares to remove the homage to Sir John A. from the steps of its City Hall this weekend, it’s worth thinking about what these gestures accomplish, and why they are sometimes as misguided as they are well-intentioned.

Macdonald’s treatment of Indigenous people gave us the Canada we now call home. Erasing his memory from the public sphere risks creating a false distance between him and the Canadian present, an easy salve for our national conscience that keeps us from coming to grips with troubling facts about the nature of our country.

Those rethinking the public veneration of Macdonald and others like him should not be dismissed or demonized as historical vandals. It is understandable that Indigenous nations like the Songhees and Esquimalt should want him out of their sight.

As is well known by now, Macdonald called Indigenous people “savages” on the floor of the House of Commons and advocated removing their children to industrial schools. This was an uncontroversial view at the time – a lesson amply learned during recent campaigns to rename buildings and institutions named after Hector-Louis Langevin (successful) and Egerton Ryerson (abortive) for their role in establishing the residential school system – but that does not make it less ugly in retrospect.

Worse, and more formative to the nation we have become, was Macdonald’s “Indian” policy in the Prairies during the 1880s, when he ordered the removal of Indigenous communities from the proposed route of the Canadian Pacific Railway and had food relief withheld “until the Indians are on the verge of starvation.”

Through Macdonald’s determination to build a transcontinental railway and willingness to brush aside the Plains nations that stood in his way, British Columbia was brought into Confederation, and the Prairies were made accessible to mass European settlement.

Had he behaved in greater isolation, the violence and influence of his methods might be taken as good grounds for banishing him. But doing so, considering the context of his time, risks the comforting delusion that he was more of an outlier than he was.

From the era of Samuel de Champlain, the European settlement of Canada entailed violence against Indigenous people and their way of life on a large scale, from the seizing of land and the spread of disease to outright warfare and judicial murder. That was understood implicitly by most contemporary settlers when it wasn’t being explicitly endorsed. It was baked into the Canadian project.

Removing emblems of Canadian identity for their ties to colonial brutality, then, is a slope that gets slippery fast, even before it reaches the name Victoria.

This is not akin to Americans debating Confederate statues, which are monuments to men who wanted to destroy the United States and pervert its founding ideals. John A. Macdonald perfectly embodied the founding ethos of our country.

Most of us are still indebted to that ethos. We may have renounced Sir John A.’s racist attitudes, but we have not renounced the fruits of them, which we know as Western Canada. In that sense, both the defenders and assailants of his record have it right. Our first prime minister wove the country together and he cruelly stamped out Indigenous cultures. He accomplished the former, in part, by recourse to the latter.

That’s why Victoria’s decision contains an undermining hypocrisy. Even if we removed every totem of our national father from Victoria to Bonavista, and scrubbed his name from every school and highway, Canada would still remain as his monument.

Victoria to remove statue of Sir John A. Macdonald
August 9, 2018 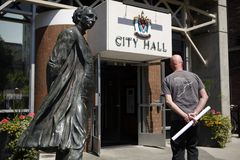