Two weeks into 2019, and it’s time to repeat a mantra from 2018 that needs to be drummed into the government of Ontario’s consciousness: Ron Taverner cannot be the commissioner of the Ontario Provincial Police.

That this is still a possibility is scandalous. Without even getting into the fact that Toronto Police Superintendent Ron Taverner is Ontario Premier Doug Ford’s close friend, the process that led to Supt. Taverner being named the next OPP commissioner was itself riddled with enough troubling aspects to rule him out for the job.

And yet neither Mr. Ford nor Supt. Taverner has ended this gross political misadventure. Instead, they’ve put the 72-year-old cop’s swearing-in on hold while the province’s integrity commissioner investigates the matter. The Premier and others have suggested that once that’s done, the appointment will go through.

It shouldn’t. Ron Taverner cannot become the commissioner of the OPP. The coziness of his relationship with the Premier – with new details laid out on Monday in a story in The Globe and Mail – is too fraught to allow it.

The two men, who have never hidden the fact they are friends, dined together on three occasions after Mr. Ford was elected Premier and before Supt. Taverner’s appointment was announced. They were also together at the Premier’s cottage for an annual charity event in late August.

One of the dinners was also attended by Mario Di Tommaso, a Toronto Police staff superintendent whom Mr. Ford subsequently named deputy minister of Community Safety, and who sat in on the interviews with the applicants for the job of OPP commissioner.

These revelations cement the closeness of the friendship between Mr. Ford and Supt. Taverner, one that goes back through the many years the latter has served as superintendent and unit commander of Division 23 in Etobicoke, where the Ford family has its power base. It’s a friendship that must rule out Supt. Taverner as commissioner.

It was only a year ago that David Livingston, a chief of staff to former Ontario premier Dalton McGuinty, was found guilty on a criminal charge of tampering with a government computer – a charge based on an OPP investigation of the premier’s office.

This is the conflict to which Mr. Ford seems oblivious or indifferent. Under Supt. Taverner, the OPP would be unable to lead an investigation into any matter involving the Ontario government, the Progressive Conservative Party or a PC member of the legislature. His appointment would also deprive the public of the assurance that the force was carrying out investigations without political favour or interference.

Supt. Taverner didn’t help matters when, after his appointment, he defended the Premier against serious allegations of interference made by Brad Blair, a deputy OPP commissioner who was serving as the acting head of the force.

Deputy Commissioner Blair said the Premier’s office had demanded that Mr. Ford be allowed to pick his own security detail and had threatened the previous head of the OPP if he resisted. The Premier’s office also allegedly told the OPP to buy “a large camper-type vehicle” for the Premier’s use, and to keep the purchase off the books.

Supt. Taverner – who was days away from being sworn into his new job – offhandedly dismissed the allegations and instead defended the actions of his old friend, the Premier.

There are other problems with the appointment. There is the question of why the job requirements were quietly lowered two days after they were originally posted in October. No one has explained this mystery; all that is known is that Supt. Taverner, a mid-level officer despite his advanced age, was insufficiently qualified under the old requirements.

That in turn has raised questions about who ordered the change and whether, as one former OPP chief has alleged, “the fix was in from Day One.” That is something only a full public inquiry could uncover.

But even barring that unlikely development, the bottom line remains that Supt. Taverner is too close to Premier Ford. His appointment was a mistake. Repeat after us: Ron Taverner cannot be the commissioner of the OPP. 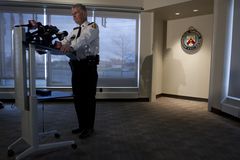