American politics are so lurid and extreme right now that they can overshadow their Canadian equivalent – even in the eyes of Canadians.

Take the issue of border security. Donald Trump’s flailing attempts to get funding for his beloved “wall” along the border with Mexico seem to be in the news every week. Stopping illegal immigration, particularly by the Mexican people he has so maligned, is a touchstone of Mr. Trump’s presidency.

By contrast, the revolution taking place in Canadian border policy has received much less notice. That’s too bad. Recent events suggest Canadians should be paying much closer attention to their own southern frontier.

To start, more than 20,000 people crossed illegally from the U.S. into Canada in the past year, according to Reuters.

Reread that sentence if you must. Illegal crossings have been so rare in the past that Ottawa didn’t keep track of them. Now migrants are jumping the world’s longest undefended border at an average of more than four dozen a day.

This is not yet a crisis. Contrary to Mr. Trump’s imputations of violence and vice, the overwhelmingly majority of illegal border crossers are simply hoping to make a better life for themselves and their families.

In fact, many if not most of the new wave of U.S.-Canada border jumpers appear to be fleeing the climate of xenophobia that Mr. Trump has stirred up in his country. In the case of the Haitians and Salvadorans making the crossing, they are fleeing likely deportation in the wake of Mr. Trump’s capricious and arguably racially motivated decision to repeal temporary legal status for migrants from their countries.

But if the current situation is not quite a crisis, it is a dramatic development that, it not properly managed, could have serious consequences for Canada’s historically successful model of immigration.

The number of migrants walking across our southern border is expected to rise again when the weather improves, and it probably won’t abate as long as America’s anti-immigration wave continues to crest.

To their credit, the Liberals seem to recognize the seriousness of the moment. Their 2018 budget includes $173-million for greater security along the Canada-U.S. border and for the quicker processing of asylum claimants so that they can be deported in a timely fashion if need be. The money is badly needed: According to Reuters, nearly nine in 10 refugee hearings were not held within the required 60-day time frame last December, because of a backlog.

If these measures seem mean-spirited from a government and country that pride themselves on being open to immigration, they shouldn’t. Rather, firm measures to regulate and process the flow of illegal border crossings are essential to keeping Canada an open-door country.

Canadians shouldn’t fool themselves into thinking they are by nature more generous and less xenophobic than the people of other Western countries.

Our unique geography – surrounded by three oceans and a land border with one of the most prosperous countries in history – has given us a rare level of control over who enters the country. We’ve used that control to institute a neutral points system and a high overall entry target that are envied around the world and fuel our happy experiment in multiculturalism. Consider what a blessing it is that there is no federal party whose single issue is anti-immigration.

Large-scale, uncontrolled migration through our southern border could change that. Across the West – in Germany, France and the United Kingdom, just to name a few countries – the refugee flood and open EU borders have turned liberal societies into hotbeds of anti-immigrant politics in recent years.

It will go against Prime Minister Justin Trudeau’s instincts to crack down on illegal border crossings. Openness is his brand and his inclination. But that might make him the right leader to ensure we don’t lose control of the only real border we have. It won’t be possible to accuse him of prejudice in doing so – he and his Somalia-born immigration minister have raised annual immigration levels in their mandate.

In Mr. Trudeau’s approach to the border, we hope he inverts the formula. To preserve Canada’s successful strategy of generous, colour-blind and controlled immigration, our Whig man must yield to Tory measures. 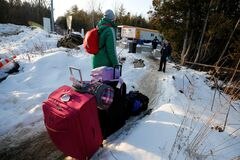