We begin this editorial with an apology to you, our faithful readers. In March, we described the Brexit situation, then careening through its third year and nowhere close to resolution, as an “omnishambles.”

An omnishambles is a state of utter chaos, total disorder and perfect mismanagement – which brings us to our apology. If you’ve been paying any attention to British Prime Minister Boris Johnson, you know that, in declaring United Kingdom politics to have reached peak shambolic six months ago, we spoke too soon. Oh, did we ever.

Because if the Conservative government was making an omnishambles of Brexit back in the spring – a happy era now remembered as a halcyon age of a merely half-hearted appetite for national self-destruction – then what words can adequately describe the scale of Mr. Johnson’s achievements?

Mr. Johnson is the author of 11 books, some admittedly banged out in the careless haste that is his style. But this week, without breaking a sweat, the PM penned the Odyssey and the Iliad of shambles. He faced his first votes in Parliament and lost them; lost his minority government’s governing majority; sacked 21 of his own MPs, including his party’s longest-serving member and Winston Churchill’s grandson; provoked his own brother into resigning from cabinet, citing a conflict between “family loyalty and the national interest"; and lost control of the House of Commons while remaining so offside the chamber’s confidence that it will not yet allow him to resolve the matter by calling an election.

Mr. Johnson did all that, and more, in the space of two days. What will tomorrow bring?

British politics today is what results from the collision of an unstoppable force, an immovable object and a clown car.

The unstoppable force is the dominant faction of Britain’s Conservative Party, which insists on not just an exit from the European Union, but the most catastrophic exit possible. It’s a plan for national self-defenestration. The immovable object is reality – the reality that a no-deal Brexit will play havoc with the economy and hurt real people; the reality that a majority of Parliament and the people will not back it; the reality that the Brexit-at-any-cost crowd can’t press the detonator without majority approval.

And the clown car is Mr. Johnson.

The Tories have transformed themselves into a protest party, even while continuing to govern a Group of Seven nation with a permanent seat on the United Nations Security Council. They’ve become increasingly monomaniacal in their Brexit obsession, and increasingly childlike. It’s an evolution that has reached its nadir in the premiership of Mr. Johnson.

Despite his claims of being a champion of conservative British values and institutions, he’s shown himself eager to run roughshod over Parliament and people, all in order to achieve something the latter did not ask for and the former has not and will not vote for.

Late last month, he announced an extended prorogation of Parliament in an attempt to make an end-run around the legislature, thereby depriving it of time to stop an auto-triggered Brexit on Oct. 31. But MPs were having none of it and by Friday, Parliament is likely to have finished passing legislation preventing a no-deal Brexit. The legislation has the backing of some Tories, or rather former Tories, since these long-time party loyalists have now been booted.

Then, after losing vote after vote, and clearly no longer in control of the House of Commons, Mr. Johnson tried to call a snap election. But under Britain’s rules for fixed-date elections, moving up the timing of the ballot requires the support of two-thirds of the House. MPs refused him. They’ll likely vote for an election in a few days, but their first concern is the disarming of the doomsday device and preventing Mr. Johnson from rearming it after Parliament rises.

In 2016, the British people were asked what they thought of the idea of skydiving. In a referendum, they narrowly answered that, in theory, they’d be willing to give it a try.

For three years, the British government has claimed that it is close to reaching a deal with the EU and acquiring the wherewithal for making a safe-ish jump possible.

But the position of Mr. Johnson’s new government is that since Britain voted for the idea of skydiving, then skydiving there must be. On Oct. 31, Britain has no option but to jump out of a plane, parachute or no parachute.

Boris Johnson renews call for early election, says he’d rather be ‘dead in a ditch’ than delay Brexit
September 5, 2019 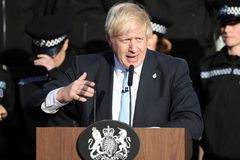 Opinion
British short-termism is going to be a long-term problem
September 4, 2019 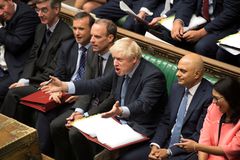