Three years ago this month, British Columbia responded to the opioid crisis by declaring a public health emergency. The province took steps such as expanding supervised drug-consumption sites and distributing naloxone, an overdose-reversal medication. Estimates suggest that several thousand lives were saved.

Even so, the death toll over the past three years has been severe: more than three dead each day in B.C., and nearly 4,000 in total. And that’s one province.

This week, Bonnie Henry, B.C.’s provincial health officer, said the steps so far have helped, but they’ve had only “minimal success.” Dr. Henry sees need for more urgent action, and she called on the B.C. government to decriminalize drugs. All of them. She cited a growing body of evidence that this could help to mitigate the current crisis.

At first blush, decriminalizing drugs sounds like a dangerous and counterproductive move. After all, if illicit and deadly drugs are the problem – and they most certainly are – then why end the criminal prohibition against possessing and using them? Isn’t this an open-and-shut case?

But Dr. Henry is far from alone in suggesting that it’s not so simple. She is part of a rising, bipartisan chorus. Former B.C. health minister Terry Lake, whose centre-right BC Liberals declared the public health emergency, says decriminalization is a logical next step. And Toronto’s board of health last summer called on Ottawa to decriminalize drugs, following the lead of Eileen de Villa, the city’s medical officer of health.

Internationally, the Global Commission on Drug Policy, a Swiss-based group featuring an array of global leaders, has stood for decriminalization since 2011. Again, this is a bipartisan position. The commission’s honorary chair, George Shultz – Ronald Reagan’s secretary of state – has spoken of “the failed war on drugs” and he advocates decriminalization of small-scale drug possession for personal use. Mr. Shultz says it’s a complicated issue, and it’s time to try tackling it with new approaches.

That’s because addiction, the compulsion to use drugs, is largely a health problem – not a criminal-law problem. Addictions may lead to crimes, but addiction itself is a health-care issue.

Given the recent legalization of cannabis in Canada, it is important to underline what decriminalization isn’t. It does not mean cocaine will be for sale at your local supermarket. It does not mean heroin and crack will be on the shelves at the corner store. Production and sale will remain illegal. But possessors of a small amount of drugs would no longer face criminal prosecution. Instead, it would be fines and the like.

Treating drug users as criminals isn’t working, especially those in the cold grip of substance-use disorders. It’s expensive to arrest people, put them on trial and send them to prison. The return on investment appears to be nil, or negative. A stint in jail does nothing to help a drug user deal with their problems – health care in jails is lacking, for one – and a criminal record weighs heavily on efforts to get a job and rehabilitate one’s life. And the looming threat of criminal prosecution for drug possession scares people away from seeking help, while also encouraging dangerous behaviour, such as doing drugs alone.

Meanwhile, police in B.C. are busting more people for drug possession in recent years – and possession accounts for a rising percentage of drug charges.

Governments in Canada, from Victoria to Ottawa, are resistant to decriminalization. Canadians, however, are beginning to see it as part of an answer, even if it is imperfect and won’t fix everything. An Angus Reid poll in February found about half of Canadians support the decriminalization of all drugs. Support is strongest in B.C., at 56 per cent.

Decriminalization of drugs is not a magic bullet that will end drug addiction. But it can be part of a broader harm-reduction strategy that includes many other steps. More money for treatment. Less money spent on prosecution. And a clearer-eyed focus on this national tragedy, and addiction generally, as a health crisis. 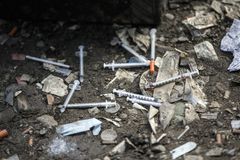