Canada’s location, as comedian Robin Williams once put it, makes us the equivalent of a really nice apartment over a meth lab.

If the American family downstairs starts going to rehab and gets itself cleaned up, that will reduce the chance of them accidentally burning down our common home. And if they can evict the guy running the drug lab – which, as you may have noticed, is currently on fire – it’ll improve the neighbourhood, lower our property insurance rates and allow us to stop sleeping with one eye open.

Geography long made us lucky beneficiaries of the spillover effects of American success; it has more recently made us undeserving collateral damage of American dysfunction and failure. That’s why there is no country with more of a stake in the outcome of the U.S. election.

Replacing President Donald Trump with Democratic challenger Joe Biden won’t instantly fix everything that ails America. But it would be one hell of a good start.

Consider Mr. Biden’s platform. He promises to roll back Mr. Trump’s tax cuts, which were tilted toward the wealthy and make it difficult to fund social programs. Mr. Biden would increase the top federal tax bracket on those earning more than US$400,000, to 39.6 per cent from 37 per cent. He would also impose higher payroll taxes on income over US$500,000, and remove the preferred rate on capital gains for those earning more than US$1-million.

Assuming Mr. Biden can get this through Congress – and that depends on whether Democrats win the Senate – it would give Washington some badly needed revenue. The U.S., with the developed world’s most threadbare safety net, needs to bulk up on inequality-fighting, opportunity-creating programs, to reduce poverty and improve health.

And to the extent that the U.S. moves to slightly higher taxes on top earners, that will undercut talk of Canadian tax rates allegedly driving a brain drain.

The biggest program Mr. Biden aims to improve is health care. Millions of Americans have no health insurance, and millions more have a bad case of health-insurance uncertainty, including the risk of losing it if they lose a job.

Mr. Trump has no health plan at all, other than wanting to kill the Affordable Care Act, a.k.a. Obamacare – a formerly conservative plan that involves using private insurance and public subsidies to gradually get to universal coverage. Mr. Biden would beef up Obamacare and, decades late, finally bring America’s safety net into the last century.

On immigration, Mr. Biden offers sanity, including the goal of extending citizenship to millions of long-term illegal residents. He also aims to enforce border security while fairly adjudicating refugee claims. That last point would be a boon to Canada, since Mr. Trump’s flouting of international law means the Canada-U.S. safe-third-country agreement risks being thrown out by Canada’s courts.

Mr. Biden would also take climate change seriously, from removing the Trump roadblocks to rules encouraging automakers to build more electric cars, to giving America a real greenhouse-gas emissions plan. On this issue, as on many others, Canada can’t go in one direction if the U.S. is going in the other.

Mr. Biden’s election would be overwhelmingly positive for Canada – but not entirely. One major negative involves the Keystone XL pipeline expansion. Former president Barack Obama blocked the project, while Mr. Trump promised to get it built. (He didn’t.) Mr. Biden has pledged to follow in Mr. Obama’s footsteps.

But over all, Mr. Biden’s election would mean a return to an America that is capable of some level of long-term thinking and coherence, including not haphazardly disparaging allies or cozying up to foes. Mr. Trump, in contrast, always seems dedicated to shedding friends and dismantling alliances.

And finally there is COVID-19. A Biden victory won’t instantly end the pandemic. But it would transfer the authority of America’s chief executive from a man whose preferred course is evasion and denial to someone who won’t undermine his own experts, and will face up to reality.

Mr. Biden, despite his opponent’s taunts, is not the candidate of socialism or the emissary of the woke. The man who, if elected, would enter office as the oldest-ever U.S. president is offering something America badly needs: maturity.

Our downstairs neighbours have gone long enough without an adult in the White House. 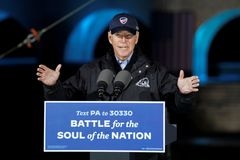 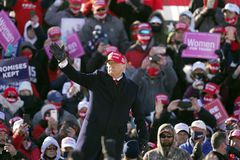 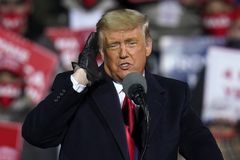