Some, such as the two Liberal minorities led by Lester Pearson in the 1960s, were models of accomplishment. In five years and over two elections, his administration introduced medicare and the Canada Pension Plan, ended capital punishment, unified the armed forces and modernized the Canadian flag.

But other minorities were short-lived efforts that produced little new legislation. Joe Clark’s nine-month government in 1979 is remembered mostly as the catalyst for Pierre Trudeau’s dramatic return to power in 1980. Stephen Harper’s two Conservative minority governments, in 2006 and 2008, had their accomplishments, but they largely served as the planning stages for the majority that Mr. Harper kept angling for, and finally got, in 2011.

So what will this Liberal minority be? Will Mr. Trudeau and his apparatchiks in the Prime Minister’s Office focus solely on trying to win the 13 seats they need for a majority, by watching the polls and calling an early election when the right moment presents itself?

Probably, at least to some degree. All governments with strong minorities such as Mr. Trudeau’s keep their eye on the prize of a majority, and it is well within Canada’s parliamentary tradition for governments to dissolve at a time that is favourable to them (see: Harper, Stephen).

But there are grounds to argue that Mr. Trudeau, if he is willing, could lead a minority that is productive and which lasts for more than two budgets, and maybe even for three.

The elements are in place. On any given piece of legislation, the Liberals will need just 13 votes for passage (assuming all Liberal members vote in favour, too). Mr. Trudeau and his team will have a variety of places to find those votes, as long as they tailor their agenda with that in mind.

Thus, like the Pearson years, Mr. Trudeau could accomplish a number of things that advance the country, while also being tempered by the necessity to collaborate.

On the climate-change front, the Liberals will have the support of the NDP, the Greens and, to a lesser extent because they are wary of federal intervention, the Bloc Québécois. The federal carbon tax will live on, and the Liberals will be pushed to do more to cut emissions.

But on the resources front, the Liberals can more than count on the support of the Opposition Conservatives as they push the Trans Mountain pipeline expansion to completion, support natural gas export projects on two coasts and tinker with controversial environmental assessment legislation that has angered Alberta and Saskatchewan.

The tools and mechanisms are there for the Trudeau Liberals to continue to maintain their delicate balance between fighting climate change and supporting Canada’s economically important oil and gas industry.

On another front, the Liberals are in a position to introduce a national program to pay for Canadians’ drug prescriptions. They were lukewarm to pharmacare during the election campaign, but the NDP intends to push the issue. In a country where millions can’t afford their medications, a national pharmacare program would be the natural successor to Pearson’s medicare package of the 1960s.

The most prickly file will be national unity. The Liberals will need to prove they can accommodate the Prairies and Quebec, and not just for the sake of their political fortunes. But they are in a position to do that; or at least they are not in a worse position than their opponents.

There is currently no other party with the pan-Canadian reach of the Liberals, even if there is a giant hole in that reach from B.C.'s Lower Mainland to Winnipeg. The Conservatives have entrenched themselves in the West with policies that aren’t translating into enough seats in Ontario, Quebec and the Atlantic provinces, and the NDP has lost its foothold in Quebec to the one-dimensional Bloc Québécois.

As has been the case for several years, the Liberals’ biggest liability is their leader. Mr. Trudeau could seize the moment and work with Parliament in all Canadians’ interests, or he could let his hubris and ego once again derail his own agenda, if and when he doesn’t get his way.

If the latter happens, this could prove to be one of those short-lived and not very useful minority governments. Not to mention the end of Mr. Trudeau’s leadership.

Canada, and Canadians, need to find the will to fight climate change
November 18, 2019 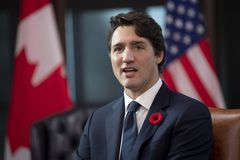