Coronavirus information
The Zero Canada Project provides resources to help you make the most of staying home.
Visit the hub
The Editorial Board
Published June 15, 2020 Updated June 16, 2020
Comments
Please log in to listen to this story. Also available in French and Mandarin. Log In Create Free Account

A lot of Canadians are grateful that liquor stores have stayed open during the COVID-19 crisis. For moderate drinkers, a reliable supply of beer, wine and spirits has provided a little stress relief and perhaps even a feeling of normalcy in strange times.

But that wasn’t the reason liquor stores were allowed to stay open.

The real reason is that 3.2 per cent of the population – more than one million Canadians – abuse alcohol or are addicted to it. Turning off the taps would have risked flooding hospitals trying to cope with COVID-19 with the additional burden of patients suffering the calamitous effects of alcohol withdrawal.

That frightening reality is a blunt reminder of the toxicity of alcohol. So many people in this country are dependent on this drug that, even during an urgent health crisis that demands physical isolation, governments have had no choice but to ensure a steady supply.

Now comes a new study that suggests the drug is an even greater danger than thought to moderate drinkers who follow Canada’s guidelines on the safe consumption of alcohol.

The study led by University of Victoria researcher Adam Sherk suggests that more than half the cancer deaths resulting from alcohol use in British Columbia in 2014 involved people who stayed within the recommended limits of 10 drinks a week for women and 15 drinks a week for men, or were former drinkers who had quit.

In other words, the study suggests that not even the safe limits are safe.

Ottawa’s recommendations are critical information. A person who wants to drink but hopes to do so without harming their health looks to them for guidance.

So it will be a great shock to that person to discover that they are as likely to be hit with a cancer attributable to alcohol consumption as someone who blows past the guidelines every week.

This troubling news is accompanied by growing evidence that drinking within the limits of Canada’s guidelines nonetheless contributes to diseases associated with heavy drinking, such as cirrhosis of the liver, pancreatitis, tuberculosis and lower respiratory tract infections. Communicable diseases, including HIV, are also more apt to occur in someone who sticks to the recommended weekly amounts than someone who doesn’t drink at all.

Let’s face it: Alcohol is a health disaster in Canada.

It is by far the most commonly used drug in the country, according to the Canadian Centre on Substance Use and Addiction. Canadians of all ages consume at least three times as much alcohol as they do cannabis, the closest runner-up.

And it is deadly. In 2017, alcohol put as many people in hospital as heart attacks did, and 13 times as many people as opioids did. And we haven’t even touched on social ills such as drunk driving, domestic violence and absenteeism in the workplace.

This new report is just one more reason to reconsider our relationship with alcohol.

The authors of the study say that the recommended guidelines should be changed to one drink a day, period. “The safest level of alcohol use is none,” Mr. Sherk adds.

That might be asking too much. Canadians like their drink; it is intimately tied to the pleasures of socializing and dining in this country.

At the same time, Canadians are getting mixed signals on booze: from health experts, from their governments and from society.

Alcohol sales in Canada are controlled to varying degrees by provincial and territorial governments. The governments have levers such as accessibility and price to control consumption, and there is evidence that moving those levers can contribute to a reduction in the harms caused by booze.

But those controls can also be politicized – remember Ontario Premier Doug Ford’s vow to bring back “buck a beer” and to increase store hours at provincial retail outlets? As well, the fact that governments sell alcohol inescapably endorses its consumption.

What needs to be done is to make it clear as vodka that it is impossible to drink regularly, even in a way officially deemed moderate, and not risk serious health problems.

That is not the blunt message we are hearing from governments, even if the fact of it is staring us in the face.

Some Montreal bar owners planning to reopen in defiance of provincial stance
June 14, 2020 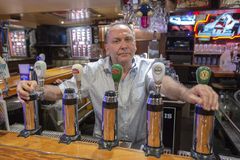 New study suggests drinking guidelines be reduced to maximum one a day
June 15, 2020 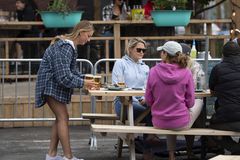 Toasting a new way to buy liquor in Ontario with these six wines
Subscriber content
June 10, 2020