To be successful in life, you need family and friends to lean on. And for Canada, the closest thing to either of those has long been the North Atlantic Treaty Organization. Canada is part of a long list of international institutions, but none is quite like 70-year-old NATO.

No, the scene of Prime Minister Justin Trudeau and other heads of government, overheard gossiping like school kids about the latest head-slapping antics of a certain head of state, was not exactly the headline news this week’s NATO summit was looking for. But the familiarity on display was at least a reminder of how NATO is different from most other international confabs.

The London summit’s public and private disagreements – and in any relationship, there are always disagreements – were at least taking place in the context of an alliance. It’s a family argument. Every member of NATO, even when they don’t see eye-to-eye, is on the same team.

Other institutions aren’t quite like that. The Group of Seven is made up of democratic and (since Russia was suspended) broadly like-minded countries, but it’s also a small collection of just seven big states. The larger G20 includes other important countries, making it an extremely useful global negotiating forum. But with a membership that ranges from Saudi Arabia to China, and South Africa to Brazil, it’s more of a confab of rivals, strangers and warily co-operating competitors than a family reunion or a homecoming week with old friends.

The Commonwealth has ties of history, but ideological distance and economic difference. La Francophonie is a useful forum for staying connected with other French-speaking countries. And as for the United Nations, containing all of the world’s states, it has the expectation of conflict among members baked into its DNA. The UN’s original purpose was making war less likely, by hopefully serving as a place where non-violent resolutions could be found for potentially bloody disagreements.

But NATO is something different. All 29 member countries are supposed to be (and in fact, usually are) on the same side – although after the fall of the Soviet Union, there was for a time a certain amount of head-scratching about who exactly was on the other side.

The alliance was built to present a united front against a common threat. It’s a bureaucratic mechanism for organizing and prosecuting a war, although its goal is not war but deterrence. The idea was that if Western Europe, Canada and the United States stood together, ready to defend one another, they’d never have to do so. It worked. The Cold War ended without ever turning hot.

NATO went through various identity crises after the Soviet Union disappeared, but the institution and the ideas it represented had staying power, even without an immediate and deadly enemy. Its structure was relied on to organize Western military involvement in the former Yugoslavia, in Kosovo, in Libya and in Afghanistan, and to combat piracy in the Indian Ocean.

Russia’s seizure of Crimea in 2014, combined with its military threats to its neighbours and the fact of Russian hacking and election-meddling, have made the alliance’s old purposes new again. This week’s London summit included the fleshing out of plans to put more NATO forces on a high state of readiness – the so-called four-30s plan, which involves the alliance being able to mobilize, in the event of a crisis, 30 battalions of soldiers, 30 squadrons of aircraft and 30 warships within 30 days.

The world of 2019 is very different from that of 1949. Today’s major external threat to the postwar system comes from Beijing, not Moscow. But that challenge is complex and nuanced, and thankfully is not primarily military. China appears to have little desire to change borders through the barrel of a gun, but its regime may threaten values that Canadians and our allies hold dear.

A military alliance such as NATO is not the answer to China. But an alliance of a different sort is.

NATO’s history is a reminder that like-minded countries can come together, with common purpose and common goals, against a common adversary or problem. And when they hold fast and hold together, and make it unmistakably clear where they stand and where their bright lines are, that can actually reduce the likelihood of conflict. Negotiating from a position of strength is never a bad idea. 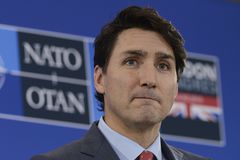 Opinion
Even though it’s from the odious Trump, the ‘two-faced’ smear cuts Trudeau deeply
December 4, 2019 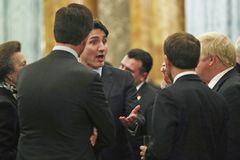 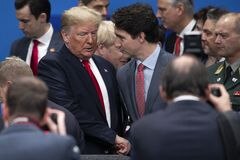