Opioid overdoses killed 15,393 people in Canada from the start of 2016 through the end of 2019. That’s almost one death every two hours. Tens of thousands more required emergency care.

This health crisis has faded from view during the coronavirus pandemic, but it is far from over. At the epicentre in British Columbia, it is deadlier than ever. In May, 170 people died of illicit drug toxicity – by far the worst month on record.

Against the massive threat of COVID-19, Canada marshalled an all-in response. The cost was huge – an economic shutdown and an eye-popping federal deficit – but it has been worth it. As of last Friday, the virus had killed 8,799 people in Canada, the third-lowest death rate among Group of Seven countries. In the past several weeks, fewer than two dozen people a day have died, compared with several hundred each day in the spring.

Canada’s battle against the coronavirus shows we can douse a health crisis. It’s time to put a similar effort into the overdose crisis. There are no easy answers – and there is no single solution – but there are many policies at the ready, if we are willing to be bold.

Decriminalization of drug possession is one immediate measure. It is an idea that political leaders have rejected, but which has been widely backed by leading health officials, and almost a majority of Canadians.

As of last Thursday, the Canadian Association of Chiefs of Police added its support.

The group’s first conclusion is that substance-use disorders are a public-health challenge. It called on Ottawa to establish a task force to make decriminalization a reality. Police argue that “new and innovative approaches” are necessary to stem overdose deaths. Arresting people, the police concluded, “has proven to be ineffective.”

It is always important to explain what decriminalization actually means. First, this is nothing like cannabis, which was legalized in 2017, and is now legal and regulated like alcohol and tobacco. Decriminalization of drugs such as illegal opioids, heroin and cocaine does not mean they will be available for sale at retail stores.

What decriminalization does mean is if a person is found in possession of small amounts for personal use, the result would not be a criminal record, jail time and the many ills that follow. Instead, the person would be turned toward help in the health care system.

There is a cresting wave of support for decriminalization, and its benefits for society.

In 2011, the Global Commission on Drug Policy backed decriminalization. The commission is a Swiss-based group whose honorary chair is George Shultz, Ronald Reagan’s secretary of state. Mr. Shultz has argued the war on drugs is a “failure that has ruined lives.”

Canadian health officials have also long worked towards these changes. This year, in a book titled Overdose by Benjamin Perrin, a former top justice adviser to Stephen Harper, the tough-on-crime ethos against drugs was recanted as a “miserable failure.” Mr. Perrin called for “care and compassion,” and fully backed decriminalization, supervised consumption sites and a safe supply of drugs.

Decriminalization and a safe supply (prescribed by doctors, to address the deadly toxicity of street opioids) were also key recommendations last year from an all-party House of Commons health committee.

What is missing is political leadership at the top. The federal Liberals and Conservatives both oppose decriminalization of drugs.

It is true these ideas might sound radical. Here’s another radical idea, from the early 2000s: safe consumption sites. Activists in B.C. were pioneers. They changed this country for the better. Today, these services are part of Canada’s health care. In B.C. this year, drug overdoses killed 554 people as of the end of May (COVID-19 to date killed 187), but not one overdose death happened at a prevention site.

The next big changes will be decriminalization and a safe supply. These are, however, only steps, not complete answers. Treatment and recovery are the ultimate goal; political leaders need people to stay alive so they have a fighting chance to recover from their life-threatening addictions.

It is time – as police chiefs now advocate, and many others have long fought – for new and innovative approaches. It is time for Ottawa to act.

Police chiefs call for decriminalization of personal drug use
July 9, 2020 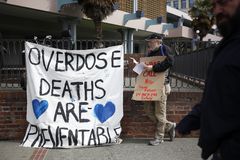