The Editorial Board
Published April 25, 2021 Updated April 25, 2021
Comments
Text Size
Please log in to listen to this story. Also available in French and Mandarin. Log In Create Free Account

Great news from the United Kingdom: Britain’s pandemic is over.

That was the declaration late last week from Sarah Walker, the chief investigator with the Office for National Statistics’ COVID-19 Infection Survey. Britain, she said, has “moved from a pandemic to an endemic situation.” The virus is still circulating, but at a controllable level.

The reason? Strong public-health measures earlier this year, and the highest vaccination level in the Group of 7.

The signs of what vaccines can accomplish are all around, and they should give Canadians hope that this country has what it takes to make more progress this week – bringing Canada seven days closer to the end of our pandemic.

Both Britain and the United States have vaccinated more people than Canada, and their results are a constant reminder of what Canada is aiming for.

In March, COVID-19 stopped being the leading cause of death in Britain, falling below dementia and heart disease. And COVID-19′s impact there continues to decline in April, with infections lower by 7 per cent last week, hospitalizations down 19 per cent and deaths down 26 per cent.

In the U.S., the number of new infections is down roughly three-quarters from the January peak, with daily deaths down about 80 per cent.

Even Canada has its own vaccination-driven success story, in the former pandemic epicentre: long-term care homes.

In Ontario, more than 3,700 LTC residents died in the first and second waves. But in the first three weeks of April, the number of LTC deaths was just two. It’s a similar story across Canada, thanks to nearly all LTC residents having been vaccinated weeks ago.

The good news is Canada’s vaccination campaign – dependent on the arrival of imported doses – continues apace. The bad news is it remains somewhat speed-constrained.

On Friday, Ottawa said it expects to receive more than 1.9 million doses this week: one million from Pfizer, 650,000 from Moderna and 300,000 from Johnson & Johnson.

Pfizer-BioNTech has become the mainstay of Canada’s vaccine effort, with one million doses arriving weekly in April, increasing to two million a week in May. Unfortunately, Canada’s other suppliers have had issues.

This week marks Canada’s first shipment from J&J – but the government said on Thursday it has no expectation of any additional shipments next month. As for Moderna supplies from Europe, they have been consistently delayed and reduced; the number and timing of May deliveries is unclear. It’s a similar story with Oxford-AstraZeneca. Shipments from India are uncertain, and while U.S. President Joe Biden has floated the idea of sharing some supply with Canada, the timing or scale of that is still undetermined.

In the meantime, nearly one-third of Canadian adults have already received a first shot, with the doses arriving this week enough to cover another 6 per cent of adults.

Could Canada be doing other things to get us to the finish line sooner? Yes.

Several provinces last week lowered the age limit for the AstraZeneca vaccine. A good move – but it would have been better, and packed more of a curve-flattening punch, if those doses had been reserved for essential workplaces and hard-hit postal codes.

And while Ottawa did the right thing in restricting travel from Pakistan and India, owing to new variants first discovered there, better still would have been for the Trudeau government to take pandemic border security more seriously. Testing and hotel quarantine should not be something people can easily find loopholes to avoid.

When a country has a lot of cases, border security seems like a sideshow. But once domestic cases are suppressed, travellers become the main source of new infections. Ask the Atlantic provinces.

The Trudeau government should also steal an idea from Manitoba, which recently cut a deal with North Dakota to have the latter vaccinate its cross-border truckers. Canada needs a similar arrangement with the Biden administration. Let’s leverage the plentiful U.S. supply to give shots to all border-crossing air crew and truckers – and while we’re at it, snowbirds and other Canadians in the U.S., too.

It’s a move that would be in America’s interest, since Canada now has – for the first time – a higher infection rate than our southern neighbour.

Opinion
One shot at a time: What it’s like working on the front lines of the COVID-19 vaccination drive
April 24, 2021 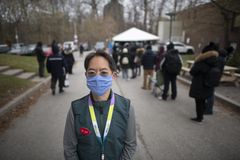 Why we need to get it right: Inside the country’s hardest-hit ICUs
April 25, 2021 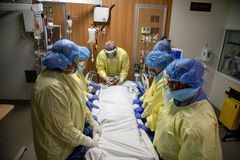 Warming up to the hotspot strategy: Why targeting hard-hit areas for immunization is Canada’s best shot at reducing COVID-19 cases
April 24, 2021 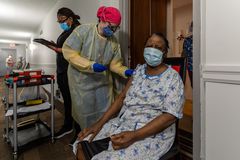