When the Liberals sought re-election a year ago, they promised Canada would exceed its 2030 climate goals. In Wednesday’s Throne Speech, the Liberals made the promise again. Reduce, reuse, recycle.

Setting big climate goals is a bipartisan sport in Canada and, over the years, neither Liberals nor Conservatives have delivered on their pledges. That includes the Trudeau government, though it colours itself green at every turn. If anything, Canada has of late moved backwards on climate change.

Under the Paris Agreement, Canada committed to cut greenhouse gas emissions by 2030 to 511 megatonnes a year, a 30-per-cent reduction from the 2005 level of 730 megatonnes. Estimates from before the pandemic suggested that policies enacted by the Liberals could get emissions down to 588 megatonnes by 2030. That leaves a big gap – and prior to the current recession, emissions were still rising. The last official tally was 729 megatonnes as of 2018.

Two days before the Throne Speech, and the Trudeau government recycling its green goals, it took a step that undermined them in a small but meaningful way.

The Pan-Canadian Framework on Clean Growth and Climate Change, agreed to in late 2016, puts a price on carbon for both consumers and industry. It also gives provinces leeway to meet the national standards by means of their own choosing, or be subjected to the federal backstop of a carbon tax.

Until now, Ottawa had been firm but flexible. Last year, it signed off on Alberta’s plan for industrial emissions; the plan was not as stringent as the federal rules, but it was close. That is not the case with industrial emissions plans in Ontario and New Brunswick. Ontario’s Auditor-General last December said the provincial plan fell short, and this page in February argued the Trudeau government should reject it, and leave the federal backstop in place.

Last Monday, however, Ottawa instead signed off on the Ontario and New Brunswick plans. In retreat, the Liberals said they would aim to toughen standards after 2022 and also said they had to give in while the question of the legality of federal climate policy is before the Supreme Court of Canada.

The top court last week heard arguments on whether Ottawa’s climate regime is constitutional, or whether it moves into provincial turf. The Supreme Court’s deliberations are likely to take several months; the score in the lower courts was as tight as could be. Courts in Ontario and Saskatchewan ruled in favour of Ottawa, while the Alberta Court of Appeal declared the federal rules unconstitutional. Across the three courts, eight jurists for Ottawa, and seven against.

In February, after the Alberta court’s ruling, this page argued: “Unless you’re a climate change denier, it’s obvious that a leave-it-to-the-provinces approach can’t be the right one.” We went on to say, “If there is anything that doesn’t fit into a model of provinces choosing for themselves, and living with the consequences, it’s greenhouse gas emissions. Pollution doesn’t respect borders.” Common national rules, as part of common, international standards, are the only logical answer.

A core question at the Supreme Court is whether regulation of greenhouse gases is a “national concern,” under Ottawa’s power to make laws for the “peace, order and good government" of the country. A key precedent is the 1988 Crown Zellerbach decision, where the Supreme Court upheld the federal Ocean Dumping Act (now part of the Environmental Protection Act). The case defined national concern as having a “singleness, distinctiveness and indivisibility that clearly distinguishes it from matters of provincial concern.” The court concluded Ottawa had the power to control ocean pollution within a province.

As a matter of science, greenhouse gases are clearly a national concern. But as a matter of constitutional law, a federal victory at the Supreme Court is far from assured. Our Constitution, and more particularly the way it has been interpreted over 153 years by the courts, has created a highly decentralized federation.

Meanwhile, Canada’s emissions are still rising, or were, until the economy was laid low by a virus. And subpar rules for industry in two provinces are now locked in through 2022. The Trudeau government’s talk of exceeding 2030′s targets may fit snugly under the slogan of “building back better,” but the immediate challenge is not one of beating expectations. Right now, the country is not even on track to meet them.

Opinion
The federal Liberals have a problem in Ontario as the Ford factor is no more
Subscriber content
September 27, 2020 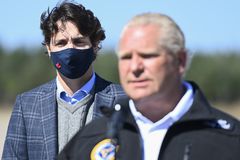 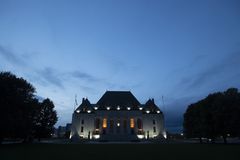