On Monday, Ontario Premier Doug Ford took a step back from his plan to hit municipalities with retroactive cuts to transfer payments. The cuts were scheduled to land this fiscal year – which is already well under way. Toronto said it faced an immediate $178-million shortfall.

Now, the Progressive Conservative government says it will hold off on some cuts – but only some, and only this year.

To understand all of this, you have to take in the fullness of Ontario’s fiscal landscape – the real geography, not the somewhat fictionalized one painted by the Ford government.

Mr. Ford has spent the past year honing his variation on the Buckley’s cough syrup approach. That company’s long-time slogan was, “It tastes awful. And it works.” It once ran television ads in which a smiling Frank Buckley assured viewers that, yes, his product is highly unpleasant but, “on the bright side, you won’t have to take it for long.”

The PC government’s constant message is that the province is extremely sick – living a “financial nightmare,” as Mr. Ford put it in a letter on Monday, including inheriting a “$15-billion deficit.” The only surefire cure is the bitter pill of significant spending cuts.

Both diagnosis and treatment miss the mark.

Yes, Ontario has a fiscal problem. However, the Ford government has consistently exaggerated its scale and nature, in furtherance of its own agenda.

First, the scale. That alleged “$15-billion deficit” left by the Liberals? Last fall, the province’s chief accountant resigned rather than sign off on that torqued number. She said the government figures “materially overstate the deficit.”

The Liberals exited office last spring claiming a $6.7-billion deficit; by last fall, after some debatable accounting changes, the PCs were happily claiming they’d been bequeathed a shortfall more than twice as large.

Second, the nature of the issue. Mr. Ford will frequently insist that his predecessors were responsible for “out-of-control” government spending – but among Canada’s provincial governments, Ontario is the lowest per capita spender. You read that right: Ontario is dead last in total spending – 10th out of 10.

Conservatives also like to claim that taxes in Ontario are out of control, and a lot of voters surely feel that way. However, the unpleasant truth is that not only is Ontario Canada’s lowest-spending province – it also has a relatively low tax burden, and Confederation’s lowest per capita revenues.

If Ontario’s deficit were a simple matter of government wasting your money, then balancing the budget would be a cinch. And the Ford government, along with the pain-is-good Buckley’s pitch, often invokes the opposite approach – that solving the fiscal situation need involve no pain at all, since everybody knows government is a money-wasting crock.

“There is this entitlement that the taxpayers owe the government a living,” is one of the many things Mr. Ford said Monday as he explained why municipalities would surely be able to make do with less. It won’t be easy. And the services the province plans to defund are, in many cases, services it ordered cities to provide.

The Ford government likes to say there is really only one taxpayer, and that is true. But in this case, it may merely be asking municipalities to pay via property taxes for things that were previously paid for through more equitable and economically efficient provincial income taxes and the harmonized sales tax. That’s not a step forward.

The bottom line is that the Ford government did inherit a budget problem, and one that has to be addressed. But it has exaggerated the scale of the issues – the debt and deficit. It’s been a case of fiscal Munchausen syndrome by proxy.

Does the province need to balance its budget? No. It just needs to get the deficit down to a manageable level, low enough that the debt-to-GDP ratio gradually falls. That’s what was happening in the last few years of Liberal government, until the party opened the taps in an election year, and then the Tories brought in accounting changes that made things look even worse.

If Ontario ran a deficit of around $6-billion or less, that would do the trick. This year, even under the new accounting rules, the province is forecasting a deficit of $9.3-billion.

Is that figure a problem? Yes.

Ontario to establish central agency to oversee mental health and addictions care
May 27, 2019 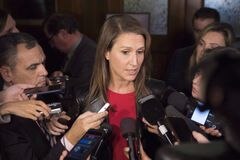