The Editorial Board
Published July 22, 2021 Updated July 22, 2021
Comments
Text Size
Please log in to listen to this story. Also available in French and Mandarin. Log In Create Free Account

Twice this week alone, and on several other occasions over the past year, city staff and police in Toronto have broken up illegal homeless encampments in parks and other public spaces.

None of this has been good PR for Toronto. Protestors have tried to interfere on several occasions and been removed by police – all of it captured on social media. And advocates for the homeless say the city’s actions are a cruel use of force against a vulnerable population, as many in the camps say they are there because they’re afraid of catching COVID-19 in the city’s crowded shelter system.

But rather than being heartless, Toronto has arguably addressed an extremely difficult situation with fairness and common sense.

You needn’t take it from us. Last October, when an Ontario Superior Court judge denied a request to suspend the Toronto bylaw banning overnight camping in parks for the duration of the pandemic, the judge said in his ruling that “the city has taken extraordinary steps to address the concerns arising from COVID-19 in its shelter and housing system.”

That was prior to the second and third waves of the pandemic in Ontario. No one had a clue how long the crisis would last, which was one of the reasons the judge decided he couldn’t grant the request.

“The sweeping relief sought would unjustifiably tie the city’s hands in dealing with encampments that raise serious health and safety concerns for an indefinite duration, and would unduly prevent the use of parks by others,” Justice Paul Schabas wrote.

But that is not all he wrote. Far from it.

Justice Schabas noted that courts in British Columbia had in the past invalidated similar anti-camping bylaws, in Victoria and Abbotsford, on the grounds that those cities failed to provide sufficient shelter space for the homeless. That lack of an alternative, the courts said, violated their constitutional right to security of the person.

He also dismissed any notion that homeless people might just be using COVID-19 as an invented excuse to avoid shelters. He said many have pre-existing health conditions that could make them more susceptible to the worst aspects of the virus in the congregant setting of a shelter.

But Justice Schabas could not ignore the fact that Toronto had gone to great lengths to respond to the needs of the homeless in the first six months of the pandemic.

He noted that, after Ontario declared a state of emergency in March of 2020, Toronto opened 30 new shelter facilities, and secured more than 1,200 hotel rooms, to ensure physical distancing could take place in existing spaces. By mid-June, 99.5 per cent of the 7,000 beds in Toronto’s shelter system complied with the two-metre distancing requirement.

By last August, the city had placed 1,570 homeless people into permanent housing. That number had risen to 5,800 by May of this year, according to the city.

And at the time of the judge’s ruling in October, there were only five COVID-19 cases in the entire shelter system.

As well, the city took no immediate steps to shut down the encampments that sprang up in the first months of the pandemic. Instead, it provided services to them, such as portable toilets, handwashing stations and access to community-centre washrooms and showers.

And, as it still does before closing down any encampment, the city sent workers to convince the residents to move to the safety of a proper shelter. At least 1,770 campers have moved into shelters since April, 2020, according to Toronto officials.

And now the vaccines are here. Thanks to clinics in all the shelters, 61 per cent of people in the system had received at least one dose as of last Friday, and 41 per cent had two.

The legitimate concerns homeless people had about COVID-19 can be addressed, and they largely have been. By last October, there was no longer a reason to allow several of central Toronto’s few green spaces to become encampments, and today that is more true than ever.

It is also true, as Justice Schabas said, “there will always be challenges in persuading some to go to shelters, even absent concerns about COVID-19.”

Toronto is removing the encampments because they are unneeded, unsafe for the people living in them, and unfairly prevent other residents from enjoying the city’s parks.

But it is doing so as a justifiable measure of last resort, after going to extraordinary lengths to find better alternatives. 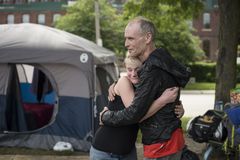 Opinion
The Trinity Bellwoods crackdown was not surprising. But there is a better way to respond to encampments
July 10, 2021 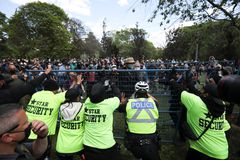