At the western end of the world’s longest undefended border, straddling the frontier and overlooking the Pacific, is the Peace Arch. “Brethren dwelling together in unity,” reads an inscription on it.

Beneath the huge structure, iron gates are mounted on the inside walls. Above those on the west side is written: “1814 Open one hundred years 1914.” And on the east side: “May these gates never be closed.”

At the other end of the continent, nearly 5,000 kilometres away, there’s a border marker erected around the same time, between St. Stephen, N.B., and Calais, Maine. “This unfortified boundary line,” it says, “should quicken the remembrance of the more than a century old friendship between these countries. A lesson of peace to all nations.”

It’s been a while since anybody’s pulse has been quickened by the world’s most spectacularly boring border. And therein lies the lesson.

More than a hundred years ago, Canadians and Americans built monuments to the friendship and co-operation that have grown along a line once marked by conflict, suspicion and war.

It’s easy to forget, and so most have forgotten, that U.S. troops once burned and looted Toronto and, in retaliation, Washington was captured and torched.

But faint echoes of that history remain. Among the 14 Canadian military heroes commemorated at the Valiants Memorial, next to Ottawa’s National War Memorial, five made their names fighting against the United States. And when Americans sing their national anthem, few ponder the strangeness of a song about defending themselves against us.

Thanks to the wisdom of generations of leaders on both sides of the border, that’s a distant, barely remembered past.

But the danger of co-operation giving way to conflict and friendship turning to grief is always there. Particularly at a moment when a pandemic has thrown governments into a panic and the White House is occupied by a man who never met a friend he didn’t want to stick it to.

Last week, U.S. President Donald Trump ordered the manufacturer 3M to stop exporting protective masks, including to Canada. The company’s N95 masks are much in demand and the world currently has a shortage. This has created a mad scramble, with wealthy countries fighting against each other for supply, and even U.S. states and the federal government coming to blows.

In this case, 3M pushed back at the President’s demand, saying that disrupting global supply chains risks harming everyone, including the United States. The U.S. both imports and exports protective equipment, and sources material around the world. For example, a special wood pulp mix used in many masks comes from a mill in Nanaimo, B.C. It’s about 90 kilometres from the Peace Arch.

Prime Minister Justin Trudeau has repeatedly been asked how he will hit back at Mr. Trump. He has repeatedly rejected the idea. That is wise. Eye-for-an-eye retaliation would have us all go blind.

One measure Mr. Trudeau has been urged to consider involves closing the border to commuting Canadian health workers. Around 1,600 nurses live in Windsor, Ont., but cross the border every day to hospitals in Detroit. That city is the epicentre of a massive outbreak, and has recorded almost as many COVID-19 deaths as all of Canada. At the Henry Ford Hospital, 40 per cent of the nurses are Canadians. Without them, health care there would collapse.

Should Canada cut off Detroit’s lifeline? Of course not. Instead, the Trudeau government should show we’re with our friends in Michigan, and with all Americans. Don’t hit back. Send help.

Rather than making it harder for these brave Canadians to do their critical jobs in the U.S., Canada should give them a hand. Detroit has a lot of empty hotels these days, and Ottawa should rent several of them and offer Canadian health-care workers in the city free lodging, for the duration. Help our nurses to continue saving American lives, while reducing the risk of them infecting their loved ones back home through daily border crossings.

Most Americans are ashamed of Mr. Trump. They’ve been ashamed for the better part of four years. A gesture of generosity on the part of Canada would be a reminder, to people of goodwill on both sides of the border, that this isn’t how the world is supposed to be. We’re better than this. 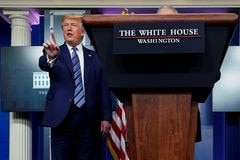 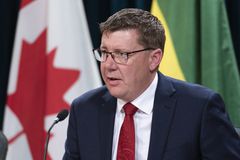