It’s not yet known exactly what will be in the Sept. 23 Throne Speech, but the Trudeau government has been hinting at ambitious new programs, powered by big new spending.

So how can voters judge whether what the Liberals are proposing is unaffordable and unwise, or sustainable and sensible? Start with three simple questions.

Is this spending temporary, or permanent? During a recession, it’s not just reasonable for governments to run deficits – it’s necessary. When private-sector spending pulls back, government temporarily steps up, counterbalancing the drop in private demand, and hastening a return to full employment.

A policy of giving money to people without jobs, which is basically what Ottawa has been doing since March, is the right approach. We can quibble over details, but without this spending, financed by borrowing, the recession would have been deeper, the rebound would be slower and the pain felt by millions of Canadians would be greater.

However, stimulus spending is by definition temporary. Its goal is its own obsolescence. The bulk of the Trudeau government spending since March fits that mould. The pandemic rescue packages – the Canada Emergency Response Benefit, and so on – were not designed as permanent programs.

Like the massive deficits Canada ran to finance the Second World War, this year’s federal deficit, expected to clock in somewhere north of $300-billion, has been about temporary spending to fight a temporary recession and a (hopefully) temporary pandemic.

But what about the spending that’s coming next, in the Throne Speech?

If it’s temporary, what’s it for? The 2015 Liberal election platform promised continuing, but small annual deficits, of no more than $10-billion a year, to pay for “historic investments in infrastructure and our middle class.” It was a plan for a temporary boost in one-off investment spending.

It was a perfectly reasonable idea and, in fact, this page has long argued that the federal government can, in non-recessionary years and in periods of low interest rates, run an annual deficit of up to 1 per cent of GDP – currently about $22-billion a year – and still keep the debt-to-GDP ratio on a downward track.

The Trudeau government ended up adopting a declining debt-to-GDP ratio as its fiscal anchor, and from 2015 to 2019 Ottawa spent around 101 cents for every dollar it took in. The debt-to-GDP ratio still fell slightly.

But Team Trudeau’s original 2015 idea of using that extra borrowing to pay for a temporary surge in long-term investment fell by the wayside. There’s a strong hint it might be revived later this month.

Would that make sense? The only fair answer is: It depends on what the money is being spent on.

No, this isn’t exactly an ideal time to be looking for new ways to further increase federal borrowing. The federal debt-to-GDP ratio is expected to jump this year from 31 per cent to 49 per cent, sending Ottawa’s debt burden back to the Jean Chrétien era. And there’s almost certainly more pandemic emergency spending to come. Depending on the course of the virus, there may be a lot more. The Trudeau government’s growing focus on postpandemic Canada risks being premature, given the fact that the country is actually still very much in the middle of fighting a war.

That said, interest rates have never been lower than they are now. Ottawa can borrow for 30 years at barely more than 1 per cent.

That means any proposal for even more borrowing, if it’s about funding one-time investments in raising the country’s long-term productive capacity, can’t be dismissed outright.

If it’s permanent, how will it be paid for? Is the Trudeau government aiming to create new social programs – which by definition means a permanent increase in government spending?

How can that be paid for?

More on that, later this week.

Opinion
Dare we broach the subject of higher taxes?
July 30, 2020 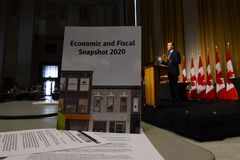 Opinion
Austerity wasn’t the right path before the pandemic, and it can’t be the road chosen after it
July 24, 2020 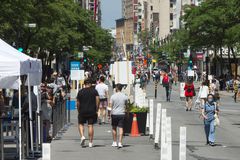