So it seems the official minimum age for children to be allowed outside without supervision has just been set at 10 in the province of British Columbia. Violators can expect to hear from child welfare services. Consider yourselves warned.

In related news, we are becoming a nation of censorious busybodies and scaredy-cats bent on inhibiting not just personal choice but the very notion of parental and child agency. The enterprise is being empowered by overbearing government policy.

Witness the latest from the B.C. Ministry of Children and Family Development.

In a recent missive to a Vancouver father, representatives of the department basically told him he could not let his kids do anything, alone or with other kids the same age, without supervision.

Things like walking to school. Or riding a bicycle. Or playing in a park, or even staying home with siblings or friends – well, unless one of them is older than 12 and thus legally allowed to have younger children in their care.

The bureaucrats may be well meaning, but they have entirely lost the plot.

The case that resulted in this absurd outcome is that of Adrian Crook, a Vancouver dad who for several months has allowed his four oldest children – aged 7, 8, 9 and 11 – to ride a public bus to and from school together.

An anonymous somebody decided to raise the alarm with child welfare authorities. Those authorities, presented with a complaint, could not resist poking their noses into the matter.

And despite the fact that there appears to be no evidence of abuse, wrongdoing or even danger, B.C. child welfare came to the conclusion that something had to be done. It decided that no child under 10 shall be left unsupervised by an adult "in the community, at home, or on transit."

It's a terrible precedent. And we're all to blame for it.

If social norms hold that is it safe and reasonable for kids to be outside by themselves and with other children, then that will happen, all across the country, and child welfare organizations won't freak out. A generation ago the sight of kids at a park or on the street, without parents present, was no reason to call the police.

Unfortunately, Canadians and their governments are increasingly adopting an extreme and absurdly narrow view of child welfare. It imagines that every moment unwatched by adults is a moment of looming danger, and that such moments must be eliminated. This mindset has taken over gradually, progressing step by small step, always professing the best of intentions.

Government has an obligation to respond to complaints of actual child abuse and neglect; the protection of children is a serious and sadly necessary function.

The state, however, should be capable of looking out for kids while maintaining some sense of perspective, and not confusing "life" with "neglect." It's surely possible to give kids too little supervision. But it's also possible to smother them with too much. Children are not adults; that's why they need protection. But neither are they infants –hence the problem with infantilizing them.

And note to whomever reported Mr. Crook to the authorities: He appears to be a thoroughly modern parent, right down to tracking his offspring via the mobile phones he has given them to use in case of emergency. A generation ago, that level of oversight might have been thought of as "helicopter parenting." Now, it's neglect.

No, not every nine-year-old has the maturity or wherewithal to be home alone, or to cross the neighbourhood unattended.

But plenty do, and a parent or guardian must be given broad leeway to determine the appropriate threshold and to inculcate the qualities and skills that lead to greater independence. A society where children can go outside, unsupervised, and where they are encouraged to do so, is a healthy and safe society.

The situation would be somewhat less preposterous if the crux of the intervention was an allegation, contained in Mr. Crook's first letter from the province, to the effect that he pulled his kids' ears. It isn't. Any allegation of abuse disappeared. This is all about the age at which children can exercise some autonomy.

What has become known as free-range parenting may not be everyone's cup of tea, but practising it should not demand state intervention, let alone the time of social workers who have genuine and pressing cases of child abuse to attend to.

No one is arguing in favour of truly neglectful parenting or Lord of the Flies-style juvenile anarchy. But government posterior-coverers and the well-meaning people they empower to judge the behaviour of other parents have combined to create an accelerating feedback loop of overprotectiveness.

To break it, Mr. Crook has launched a crowd-funding campaign in support of a legal challenge.

Is there a lawyer in the house? 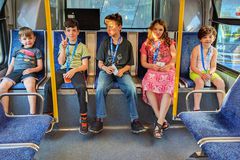 Opinion
Kids on public transit – who could object to that?
September 6, 2017