Donald Trump is not a man equipped with a functioning moral compass. The latest evidence of this disturbing fact is his depraved claim that the previous president, Barack Obama, tapped his phones during the 2016 election campaign.

"How low has President Obama gone to tapp [sic] my phones during the very sacred election process. This is Nixon/Watergate. Bad (or sick) guy!" President Trump tweeted last Friday.

He provided no evidence that this happened, and White House staff have conceded they have none to offer. But he and they are not backing down, demanding instead that the House and Senate Intelligence Committees prove in an investigation that Mr. Trump's allegation is the fabrication that everyone already knows it to be.

It's a grand waste of time, but it suits Mr. Trump's purpose by distracting the public from the circus that is his first months in office. It is a classic bait and switch that takes the finger pointing at his campaign's questionable contacts with the Russian government prior to the election, and momentarily redirects it elsewhere.

But that moment's respite for a chaotic administration comes at a cost to the United States.

Mr. Trump's attack on his predecessor is a scorched-earth attack on the office of the President. Baselessly accusing the former chief executive of abusing his power by ordering the tapping of a political opponent's phone (the "Nixon/Watergate" subtext) undermines Americans' faith in the Oval Office.

Were there factual evidence that Mr. Obama had actually done this, it would rock America to its core. Nothing short of a massive investigation would be required, and Mr. Obama, were he found to have acted in such a manner, would see his reputation destroyed.

Does anyone believe this is what will happen? Mr. Obama has denied ever ordering the wiretapping of political opponent. And his denial is convincing. A president can't personally order wiretaps or surveillance. That is a power reserved for criminal justice and security agencies, which furthermore need to clear any such request with a court, by obtaining a warrant.

Is Mr. Trump suggesting that Mr. Obama covertly hired agents to tap the phone lines in the Trump Tower and report the findings back to him and him alone? Seriously?

The truth is that Mr. Trump is cribbing from claims by alt-right news sources that have been arguing that the Obama White House was monitoring Mr. Trump and his associates before the election.

But those stories are based on a misleading interpretation of mainstream reports that said U.S. law enforcement and security agencies were "examining intercepted communications and financial transactions as part of a broad investigation into possible links between Russian officials and associates" of Mr. Trump, as one New York Times story put it.

There is ample reported evidence that American officials were concerned about links between Mr. Trump's campaign and Russian officials last year and were actively investigating that possibility.

In December, the FBI said it supported the CIA's conclusion that Russian operatives had tried to swing the November election in Mr. Trump's favour, although not in collusion with the Trump campaign.

None of this, however, would have had anything to do with Mr. Obama. The CIA and the FBI operate independently of the White House. It's likely that Mr. Obama wasn't aware that investigators were looking into Mr. Trump's possible Russian connections. To jump to the conclusion that Mr. Obama personally ordered surveillance of any kind, let alone a wiretap on Mr. Trump's telephones, is absurd to the point of stupidity.

It is also somewhat self-defeating to make such an allegation. It raises the possibility in the public's mind that Mr. Trump and his associates were in fact under surveillance.

If officials were able to get a warrant allowing them to intercept communications inside the Trump camp, they would have had to convince a judge that there was probable cause to suspect illegal activities had taken place.

It is very troubling to contemplate the possibility that Team Trump met that threshold. So why bring attention to it?

Let's look at that Trump tweet again: "How low has President Obama gone to tapp [sic] my phones during the very sacred election process. This is Nixon/Watergate. Bad (or sick) guy!"

It encapsulates everything that is disturbing about Mr. Trump. It is sociopathic in its indifference to its falsehood. It shows a lack of understanding of the powers of the office of the President. It deliberately corrodes faith in democratic institutions. And, like many of the undisciplined and petty things Mr. Trump tweets, it will likely turn around and bite him back in the end.

But in the short run, he has taken the spotlight off his own failings, and successfully put his political enemies on the defensive. It is the quintessential Trump tweet. 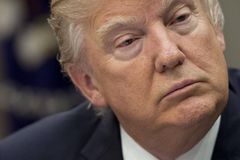 ANALYSIS
From wiretapping to immigration: Trump's busy week ahead
March 5, 2017 Alleged CIA data breach by WikiLeaks could expose Canada’s vulnerabilities: ex-analyst
March 7, 2017
Follow us on Twitter @globedebate Opens in a new window
Report an error Editorial code of conduct
Due to technical reasons, we have temporarily removed commenting from our articles. We hope to have this fixed soon. Thank you for your patience. If you are looking to give feedback on our new site, please send it along to feedback@globeandmail.com. If you want to write a letter to the editor, please forward to letters@globeandmail.com.
Comments