It is a rare moment when we get to appreciate that we are living in what is, sometimes, a kinder, better world. Such moments should be acknowledged. When fire devastated Fort McMurray, people pulled together to help one another, as humans do on our better days. But one human reaction stood out as something new and unexpected, a signal that our values and our sense of the world have shifted in a welcome direction: the remarkable outpouring of emotion and concern for abandoned household animals threatened by the flames.

Only a few decades ago, the strength of this compassion would undoubtedly have been subjected to mockery about misplaced priorities. It is welcome evidence of how the human-animal relationship is evolving – outpacing laws that still classify animals in anthropocentric terms as mere property – that the Canadians who shared their hopes and fears about helpless creatures unknown to them could do so with a 21st-century confidence that this was the right and normal response.

For most of history, this identification with the potential suffering of other species was considered not just trivial but morally wrong – an offence against the divine ordering of things, or a demeaning of human rationality by suggesting that it was rooted in animalistic nature. Darwin showed us otherwise, but in some ways we are now inhabiting a post-Darwinian moment: We are not so much bending to our animal side as we are recognizing the familiar, human-like traits of creatures who could formerly have been dismissed and mistreated as alien beings.

We are inconsistent in our compassion, to be sure. Cecil the lion commands much more sympathy in his crass, unnecessary killing at the hands of a trophy-hunting dentist than lab animals who unwillingly collaborate in cutting-edge research. Pet-owners are often called out for their selective displays of love and convenient hypocrisies, and accused of sentimentalizing pets in a way that too easily distances them from their true animal nature.

There's truth here, but not the whole truth. The growing attachment to household animals may be selective in some cases – doggy birthday parties don't advance the cause of animal rights appreciably – but anyone who develops a deep relationship with a pet is well-placed to extend that empathy to other creatures, including other humans.

It's no coincidence that the animal-rights movement that has campaigned for better conditions in factory farms, slaughterhouses, zoos and marine parks has made breakthroughs at the same time the attachment to household animals has strengthened. We abhor the confinement of elephants, or the tedium suffered by a performing orca or the casual cruelties of a mismanaged abattoir, because we have figured out, unlike most of our distant ancestors, that these creatures are indeed suffering, that their suffering is real, and that we have the responsibility to stop it. To get to that stage of enlightened humanity has been a long learning process, taking place over the centuries as hierarchical religious texts gave way to more rational scientific inquiry, and animal-protection societies were formed by many of the same people who attacked the institution of slavery. This makes sense: All inhumanity begins with a devaluing of others – different by religion, colour, tribe or simply species – as less than human.

But if you want to accelerate that process of historical understanding, and advance the progress narrative at the individual level, adopt a pet and observe – yourself. According to studies at Brock University, racial prejudice and discrimination may be associated with a strong belief that humans are superior to animals. By encouraging children to interact with animals in a thoughtful, compassionate way, you have a better chance of humanizing their response to people who appear to be different.

One of the problems with the animal-rights debate, like many conversations about human rights, is that it is too often framed in impossibly broad terms that are unattainable for imperfect humans living in the messy real world of meat-eating and medical research. It may be more productive to focus on the individual human-pet relationship as a learning tool. We care more for our own children than for unknown children halfway around the world, but that doesn't mean we are indifferent to their suffering in times of famine or war – the key point is to make the connection between them and us, something that tribal, religious and nationalistic prejudices tried to deny for centuries. We are now in a good position to bridge that gap and find that empathy with animals, and it makes sense that we learn to do so by direct experience rather than an all-encompassing theory.

Which is why we should be proud to live in a world where people can care so deeply about the pets left behind when fire strikes, feel the pain of fellow beings separated from their animals, and praise emergency crews who think nothing of taking time off from firefighting to look after helpless, non-human creatures.

More and more Canadians know and understand this two-sided relationship. The justice system, for the most part, does not. It is still stuck in an older idea of human-centred hierarchy and property rights, closer to the cold-hearted laws and compensation schemes of the Old Testament than the modern world of tear-jerking lost-pet reunions and obituaries where a faithful Golden Lab or sage Siamese takes pride of place among survivors left to mourn.

Insurance companies that can calculate the value of a lost house in the midst of a conflagration can't begin to put a number on a dog or cat. But if they could, it would be essentially valueless. A home costs money to rebuild, but a new animal is available for the asking at the nearest shelter. Yet we know that household animals, unlike the houses they inhabit, aren't interchangeable. These are living things with personalities and eccentricities, appetites and desires, who feel pain and exhibit pleasure, adapt to our habits and customs as we adapt to theirs, and strengthen their connection over time until we believe we can read their minds as they most surely can read ours. They are not human, but neither are they things.

SPCA asking evacuees to register pets left behind in Fort McMurray
May 8, 2016 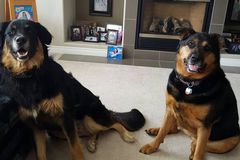 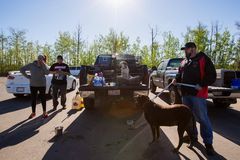 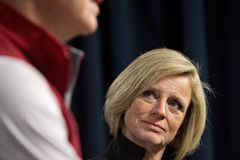