Jack Layton was a politician in the best sense, but that was not the only reason there was palpable sadness all across this country when he died on Monday. Why did he touch Canadians so deeply? Because the spirit that animated him throughout his three decades in politics was suddenly manifest, humbly, without egotism, yet in a way that was clear to all, as he fought cancer and a fractured hip while leading his political party to the most stunning success in its history.

Take, as an example, the moment during the spring election campaign when he danced at the back of the party's airplane to Aretha Franklin's Respect. Or when he confronted Michael Ignatieff in the leaders' debate: "Why do you have the worst attendance record in the House of Commons?" He treated life as a joyous thing and then rose to the moment.

Or take his last news conference, not quite a month ago. Gaunt and seeming, with shocking suddenness, to be near his end, he spoke optimistically of returning in the fall to continue leading his party. That optimism was Jack. The personal was political. His optimism was the foundation of the New Democratic Party's success in Quebec, where it was never given a chance until Mr. Layton, who had grown up in Quebec, insisted it had one, even though it had never won more than a single seat there.

Or take his letter to Canadians, dated two days before his death, in which he reached out to others who are fighting cancer: "Please don't be discouraged that my own journey hasn't gone as well as I had hoped. You must not lose your own hope." Even when his own hope was gone, he pleaded for the necessity of hope in others. "My friends, love is better than anger. Hope is better than fear. Optimism is better than despair." Few politicians anywhere have left public life on such a note of grace.

Mr. Layton was a man of convictions and ideals who reached across partisan lines to work pragmatically and for the public good. And he laughed a lot while doing so.

There is a message for the NDP in his success: there are votes to be had for a moderate social-democratic party. The spring election vaulted Mr. Layton past the party icons Ed Broadbent and David Lewis. Mr. Layton was the only NDP leader to increase his party's support in each election. He was the only one who achieved the title of Leader of Her Majesty's Loyal Opposition.

Some influential NDPers had wondered whether his "optimism" was impractical, that of a dreamer. For much of his 20 years on Toronto City Council, he had been fairly hard-left. Roy Romanow suggested yesterday, in an interview on CBC-TV, that he had had doubts. The former NDP premier of Saskatchewan understands that governing is for the pragmatic. Nationally, the NDP in the recent period before Mr. Layton seemed not to know where votes were to be found, offering little more than a rote call for more public services and against tax cuts – as if working people mindlessly support high taxes.

He grew. He ran for mayor, lost, and dusted himself off. He lost twice, federally. He went back at it. He became president of the Federation of Canadian Municipalities, where he worked with municipal leaders of divergent views and took an important personal step on to the national stage. Mr. Broadbent, whose moderation had served the party well, nominated him for leader in 2003. Mr. Layton was ultimately able to steer a temperate course.

The party's success may prove to be ephemeral. It is bound up in Mr. Layton's appeal, in Liberal Party weakness, in fatigue with the Bloc Québécois, in an infatuation among Quebeckers that may melt away. It seems a cosmic unfairness that Mr. Layton brought the party this far and is now gone. But that's politics.

He connected with people. Politicians are said, always, to be held in disrepute, yet Mr. Layton showed in his career that the public is willing to respect and embrace politicians when they exude genuineness and focus on a positive message. The son of a Conservative cabinet minister under Brian Mulroney, the grandson of a Union Nationale cabinet minister, he was born to be a politician. With his courage and grace, Mr. Layton ennobled politics.

Sometimes what divides us is revealed, all in a moment, to be small and petty. Cancer does not discriminate among party lines. Each one afflicted fights it or accepts it according to his lights, and Mr. Layton chose to go on doing the thing he loved, politics, campaigning, being part of the national show, until the last moment possible. At that last news conference, when the country saw him not as a party leader but as a person nearing death, he was reminiscent of Terry Fox, shortly before his death, announcing that his cancer had returned and giving up his cross-country run. And many Canadians realized they would grieve for him as if they had known him personally, and loved him.

State funeral for Jack Layton to be held Saturday in Toronto
August 22, 2011 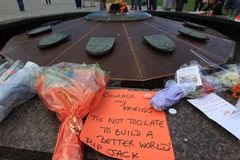 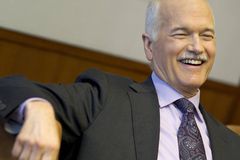 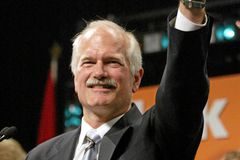