If we want Canadian children to be overweight, inert and unhealthy throughout their lives, we are doing everything exactly right.

They're driven to school, where they spend six or seven hours in the state of disciplined immobility that we call learning. With high test scores as the supreme goal, deskbound students rigorously train their brains at the expense of their bodies, and take home enough schoolwork to sustain their unhealthy lifestyle well into the evening.

The small amount of modest physical exertion squeezed into their busy timetable falls far short of what's recommended by both medical and educational authorities. When they play games in what passes for free time, they're more likely to be staring at mesmerizing screens than sprinting around a field. Compared with Canadian students from a generation ago, they are weaker, fatter, less flexible and less fit. As they mature into the inactive adulthood that their soporific school days are perfectly preparing them for, they will be at an increased risk of heart disease, stroke, diabetes and cancer. But, hey, no running in the halls!

Technology is the future, according to our educational business model, which naturally gives priority to studying math as opposed to running around aimlessly. And, yes, if our students were outperforming the competition on the battery of standardized tests they're subjected to, then maybe we could justify their physical deterioration – it's not as if improved aerobic capacity will provide an edge in the 21st-century workplace, where manual labour is in sharp decline and good jobs in the NHL are hard to come by.

But in fact math scores have been falling steadily in most Canadian provinces, despite the sacrifices children are forced to make. In Ontario, the proportion of Grade 6 students who meet provincial standards fell from 61 to 54 per cent in the last five years – and what was the response? To mandate 60 minutes of daily math instruction at the expense of other less obviously useful subjects, and allow the energetic young bodies that must satisfy this anxious provincial priority to wither a little more.

The education ministries that oversee a Canadian child's hectic schedule manage to be conflicted about this trade-off. Provincial guidelines recommend 20 to 30 minutes a day of sustained moderate to vigorous physical exercise within the school day, and with good reason. Researchers have amply demonstrated the connection between physical fitness and improved brain function. Active children have improved cognitive skills, are more attentive, less aggressive, more inclined to enjoy their school work and better placed to do well academically. If you set out to design a system that could dependably raise test scores, you would definitely look for ways to increase physical activity.

Exercise the heart and lungs, and the brain will follow. We know this as adults, that it shouldn't be our lot in life to be chained to a desk and hunched over in our work. And yet we have purposely imposed these same cramped and contorted conditions on our children, as the basis of their intellectual development. What were we thinking?

When math scores go down, it's all too tempting to add more math to a student's work week. But that narrow utilitarian focus, confusing more with better, and serious with smart, is ultimately destructive if it comes at the expense of students' overall fitness. It's a basic evolutionary truth that our bodies are meant to be used – physical activity is not just an adjunct to a functioning brain, the awkward relic of a distant hunter-gatherer phase, but a necessary component of high performance and a fundamental source of lifelong happiness.

Since education is now a competitive industry obsessed with numbers and scores, let's consider a few statistics that get overlooked as the mind is divorced from the body. According to the Canadian Health Measures Survey, 93 per cent of Canadians between five and 17 don't attain the recommended amount of daily exercise – 60 minutes of moderate to vigorous physical activity, which is double what Canadian schools aspire to provide (most in fact fall well short).

The same survey found that the percentage of boys aged 15 to 19 who were overweight or obese rose from 14 per cent in 1981 to 31 per cent in 2007-2009 – for girls, the increase was from 14 to 25 per cent. Meanwhile, flexibility and muscular strength are in decline. Despite the fact that children have grown taller and heavier than their 1981 counterparts, the grip strength of a typical 12-year-old boy in the 2007-2009 survey fell from 49 kg to 44 kg. (A comparable child in the traditional Old Order Mennonite group, which shuns technology, is 50 per cent stronger.)

Not surprisingly, physical education as a stand-alone subject is slowly disappearing – Queen's University recently suspended its phys-ed degree, and fewer than half of Ontario's elementary schools have access to a phys-ed teacher. Apart from Manitoba, where a student-centred phys-ed program is now compulsory through Grade 12, most classroom teachers struggle to incorporate a mere 20 minutes of useful workouts into their crowded instructional time. As a result, provinces such as Ontario now urge children to walk or bike to school, a tacit acknowledgment that the daily requirements for physical activity won't be met within the curriculum.

If you have to quote a Latin saying as a rejoinder against the modern dogma of standardized achievement and academic myopia, you know the good fight is pretty well lost. But let's give it a try anyway: Mens sana in corpore sano. Despite the uncomfortable duality we try to impose when we explain away all that sedentary behaviour in our schools – math scores must improve! – a healthy mind and a healthy body are inseparable. 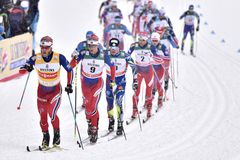