The Conservative election victory is a double victory for Stephen Harper. Not only have the Conservatives secured their elusive majority, but the election also produced a New Democratic official opposition. The relegation of the Liberals to third-party status represents an historic moment in Canadian politics, and an opportunity that the Conservatives can build on if they listen to their better angels and demonstrate moderation and the politics of consensus.

The Conservatives have successfully redefined the middle ground in Canadian politics. The Liberals ceded that ground by being perceived to have moved left, and by focusing on leadership politics over rebuilding their party. The NDP's success shows that many Canadians hunger for a strong alternative and a positive message.

Mr. Harper's win is an endorsement of the Conservative Party's steady stewardship of the economy and comparative respect for the free market, its relative moderation and its concerted effort to reach out to new Canadians. Jason Kenney's relentless outreach to communities that the Liberals had long taken for granted has produced a sea change in Canadian politics. His immigration reforms, far from alienating immigrants, were welcomed by them. And Canadians wished to reward the governing party for this country's resiliency. The worst of the downturn is over; the country is finding its feet again.

The majority provides an opportunity for a stable, four-year government, which allows Mr. Harper and the Conservatives to take the long view in tackling Canada's biggest challenges - especially economic growth and fiscal restraint in an era of global uncertainty, and the imperative to make health-care delivery sustainable as the population ages. Beyond simple economic recovery, he needs to build on his innovation agenda to make Canadian growth a phenomenon much more oriented to research and development. He will need to make clear to the provinces that increases in health-care transfers will need to be accompanied by substantial reforms, with a stronger element of publicly funded private delivery, where appropriate.

The victory, however, should not be read as an endorsement of Mr. Harper's unfortunate tendencies to secrecy and control, or of his low regard for Parliament and its officers.

Whatever their partisan preferences, Canadians should take heart from the Quebec results. The Bloc Québécois is effectively extinct, its leader defeated, its approach to federal politics rebuked. Three in four Quebeckers cast a vote for federalist parties. It may be a protest vote, a vote for the charisma and the nationalist-friendly promises of Jack Layton. But still, after years of Bloc obstructionism, Quebeckers are expressing a desire to participate in the affairs of their nation - of Canada.

But with that, a strong word of caution. Quebec has gone from being a faint aspiration for the NDP to supplying a majority of its caucus. That influence, to be held by rookie (in some cases accidental) MPs, is unprecedented. At the same time, not since 1917 has a majority government been so underrepresented in Quebec.

And with the Parti Québécois well-placed to take eventual power in Quebec City, we are entering a new phase in Canada's dealings with Quebec. Mr. Layton and Mr. Harper will be fierce opponents in the House of Commons. On national unity, they must speak, as much as possible, with one voice.

The Liberals have been humbled. They have lost their foothold at the centre - in all senses - of Canadian political life. The party of Laurier, King, Pearson and Trudeau, a party that under Jean Chrétien and Paul Martin slew the deficit in the 1990s, now risks falling into complete irrelevancy. Michael Ignatieff said last night that "democracy teaches hard lessons," and that it was time that Liberals "look at ourselves in the mirror." They have a daunting challenge ahead to rebuild their grassroots, their finances and their ideas about who they are and what Canada needs them to be. On Parliament Hill, they will need to go in with elbows up, serving as a scrappy, principled opposition, as they did in 1984.

Mr. Harper has a clear mandate from Canadians. His economic stewardship has been strong, and the country is positioned to take a further step, with greater productivity growth. What the new Parliament needs to do is avoid further polarization between left and right and work for the common interest of Canadians.

Earlier
As it happened: Instant updates on a historic election 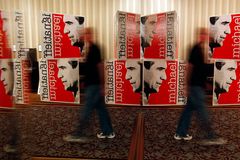