Toronto is a city suffering from structural problems that need to be overcome over the next mayor's four-year term. The voters now have a choice between two flawed candidates, neither of whom has a convincing account of how he will bring about these changes; a third does not accept the fact that the city is in any trouble.

Rob Ford's standing in the polls is a loud and clear message from the citizens that all is not well - in particular that they are at the limit of their toleration for new taxes and tax increases. More than any other candidate, he has captured the mood of voters, who are frustrated, even angry.

Toronto's public finances are not sustainable. The city government cannot borrow to finance its operating expenses. It cannot reasonably impose more taxation on its residents and businesses. If current symptoms persist, its government wages and salaries may well rise by 20 per cent in the next mayoral term. The city employees' unions can no longer be appeased. The affairs of the city of Toronto cannot be treated as if it were business as usual. They cannot be fixed by attrition, by the mere passage of time, or by restraining new spending, or cutting here and there.

There is a special problem in the arbitration awards for the essential services of police and firefighters. Their increases are considerably in excess of cost-of-living increases. Rocco Rossi, a preferable candidate who has now withdrawn, has suggested a change to "criteria-based arbitration," which might require new provincial legislation. In any case, the next mayor must confront this uphill challenge. George Smitherman has shown no inclination to do so. As for Mr. Ford, in spite of his professed fiscal conservatism, he has expressed no concern about the police and fire budgets.

Mr. Ford has been a good city councillor for 10 years. He has delivered tangible improvements to his ward, he has been remarkably responsive to his constituents, and he stands for the principle that individuals should take responsibility. But his small-scale, grassroots virtues are not enough by themselves to solve the ills of a huge metropolis; he is a retail politician. Moreover, he is an instinctual person, lacking in analysis, and his plans have gaps and inconsistencies. His propensity to impetuous words and deeds could be embarrassing and possibly harmful to Toronto. Nonetheless, the surge in support for a man with these characteristics, in a sophisticated, cosmopolitan city, amounts to an extraordinary indictment of the status quo. It is a phenomenon that all Toronto's politicians must take seriously; Mr. Smitherman has already repositioned himself, shifting on the ideological spectrum from where he probably would like to be.

Where Mr. Ford is unrealistic, Mr. Smitherman is vague. The risk in supporting Mr. Ford is what he might do as mayor, the risk in supporting Mr. Smitherman is what he might not do. The latter of the two has failed to articulate a vision or a strategy of his own, and he could easily end up as a second David Miller - what Joe Pantalone, the third candidate, openly promises to be. Still, Mr. Smitherman understands the complexities of multi-tiered government. In the provincial cabinet, he brought no structural change to the health budget - a monster that needed to be wrestled to the ground - though he effectively executed the tasks that Premier Dalton McGuinty assigned him. He is essentially a professional politician, an office-seeker with a taste for managing, but not for transformation.

Between elections, the mayor of Toronto must work with three constituencies: the provincial government, the city councillors and the unions. Mr. Ford is likely to be at odds with all three - unless he wins by such an impressive margin that Mr. McGuinty finds it necessary to accommodate him as a de facto opposition leader in Ontario.

Mr. Smitherman knows his way well around Queen's Park and the Liberal Party that is currently in power there. He understands the dynamics of politics as well as of government, and would be better than Mr. Ford at balancing and cajoling the various elements on City Council, while summoning up ruthlessness if need be. He will probably appease the unions and seek compromises with them. He shouldn't. If an unmistakable fiscal crisis breaks out, the aggressive side of his volatile personality may come in handy, at the eleventh hour.

Mr. Ford and Mr. Smitherman have similarly unpersuasive and unsatisfactory platforms. In the end, Mr. Smitherman's ability to get things done makes him the better candidate; Torontonians may have to live in hope that he tries to do the right things, and that he comes to see the city's financial predicament as the fight of his life. The electors of Toronto should guardedly opt for George Smitherman.

Join Editorial Board Editor John Geiger for an online discussion about this editorial, Friday at 2 pm ET, here.

earlier
Behind The Globe's endorsement for Mayor of Toronto
April 28, 2018 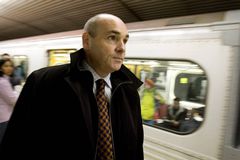 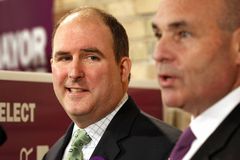 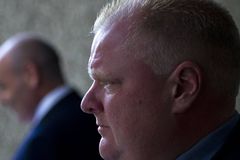 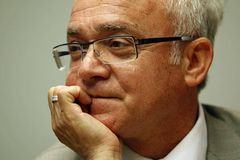 Mayoral hopefuls drop the gloves
May 2, 2018 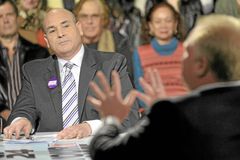