A week ago in Ferguson, Missouri, a young, black man named Michael Brown was shot and killed by the police. We don't know much about what happened, or whether his death was justified, a mistake or an accident – or something worse. To many in Ferguson and across the continent, it looked like another example of police overreacting, over-policing and killing someone for no good reason. We don't know that, at least not yet. What happened that night is still unclear; an investigation and someday probably a trial will settle it.

But we know what happened over the following days and nights in Ferguson. None of it was in the heat of the moment. It was all carefully considered and it's all on camera. It plays like an Oscar-worthy documentary on everything policing is not supposed to be.

The police caught on camera in Ferguson earlier this week, calmly running amok, were absurdly well-armed – but almost entirely untrained in how to be police officers. They weren't upholding the peace or protecting citizens. No, quite the opposite.

Faced with a small, peaceful protest against an alleged case of police using excessive and unnecessary force, police responded with… excessive and unnecessary force. SWAT teams were called in. Armoured vehicles were hurried to the scene. Officers in full body armour, anonymous behind black gas masks, used tear gas and flash-bang grenades to clear the streets. Reporters were arrested for doing their jobs. At least one local alderman, too. The Internet is overflowing with images of officers pointing guns at unarmed civilians; on Wednesday, one of the armoured vehicles had a sniper on its roof, carefully aiming through his scope at demonstrators on the other side of the street.

Yes, over several nights of protest, there had been some looting and violence – but the police displays of force were almost entirely directed at people lawfully exercising constitutionally protected rights.

On Thursday, with the situation spinning out of control, the Governor finally yanked responsibility away from local police, putting it in the hands of Capt. Ron Johnson of the Missouri Highway Patrol. Capt. Johnson took a different approach. There were no gas masks and no armoured vehicles. Police walked into the crowds and mingled. People took selfies with cops. The police no longer saw their job as stopping the protests; they were instead there to assist citizens in doing something that is their right, namely protesting. Imagine that.

What are the police for? In 1829, the first modern police force was created in London by home secretary Sir Robert Peel. It is the precursor to and model for all police forces in Canada and the United States. London's Metropolitan Police Force was founded on a philosophy that came to be known as Robert Peel's Nine Principles of Policing. Nearly 200 years on, there is no clearer statement of what policing in a democratic society is supposed to be about.

1. To prevent crime and disorder, as an alternative to their repression by military force and severity of legal punishment.

2. To recognize always that the power of the police to fulfill their functions and duties is dependent on public approval of their existence, actions and behaviour, and on their ability to secure and maintain public respect.

3. To recognize always that to secure and maintain the respect and approval of the public means also the securing of the willing co-operation of the public in the task of securing observance of laws.

4. To recognize always that the extent to which the co-operation of the public can be secured diminishes proportionately the necessity of the use of physical force and compulsion for achieving police objectives.

5. To seek and preserve public favour, not by pandering to public opinion, but by constantly demonstrating absolutely impartial service to law, in complete independence of policy, and without regard to the justice or injustice of the substance of individual laws, by ready offering of individual service and friendship to all members of the public without regard to their wealth or social standing, by ready exercise of courtesy and friendly good humour, and by ready offering of individual sacrifice in protecting and preserving life.

6. To use physical force only when the exercise of persuasion, advice and warning is found to be insufficient to obtain public co-operation to an extent necessary to secure observance of law or to restore order, and to use only the minimum degree of physical force which is necessary on any particular occasion for achieving a police objective.

7. To maintain at all times a relationship with the public that gives reality to the historic tradition that the police are the public and that the public are the police, the police being only members of the public who are paid to give full-time attention to duties which are incumbent on every citizen in the interests of community welfare and existence.

8. To recognize always the need for strict adherence to police-executive functions, and to refrain from even seeming to usurp the powers of the judiciary of avenging individuals or the state, and of authoritatively judging guilt and punishing the guilty.

9. To recognize always that the test of police efficiency is the absence of crime and disorder, and not the visible evidence of police action in dealing with them.

The militarization of the police, in material and more importantly mindset, is not solely an American phenomenon. We see it in Canada too. Some police and police chiefs well remember Peel's nine commandments; many do not. There are painful Canadian examples of policing gone awry, from Dziekanski to the Toronto G20. As in Ferguson, these cases of officers overreacting and resorting to force, force and more force grew out of something deeper: police forgetting their principles – and in the process, forgetting how to do their jobs.

Racial wounds reopen as Missouri shows an ugly side
August 14, 2014 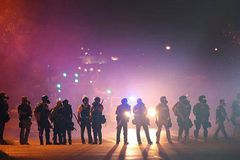 Opinion
Why are U.S. politicians slow to respond as Missouri simmers?
August 14, 2014