The six-year sentence for attempted murder given to the Toronto police officer who shot Sammy Yatim sends the clear message that society expects officers who use lethal force to adhere to their training. But the ruling, handed down Thursday, also suggests the training in question is inadequate.

Constable James Forcillo shot Mr. Yatim nine times in the summer of 2013 after Mr. Yatim, then 18, brandished a small, 10 cm knife on a streetcar. The other passengers fled. After calmly talking with the teen for a while, so did the driver. Officer Forcillo was the first policeman on the scene and immediately drew his gun. He ordered Mr. Yatim, who was pacing alone on the streetcar, to drop his knife. Mr. Yatim yelled epithets at Officer Forcillo, as other officers quickly surrounded the vehicle.

At trial, a jury found Officer Forcillo not guilty of second-degree murder but guilty of attempted murder. Evidence showed that the first three shots killed Mr. Yatim. The jury found those shots were not criminal, because the officer felt he was in imminent danger. Hence the not-guilty verdict on the charge of murder.

But the second six shots weren't justified, because Mr. Yatim was down and mortally wounded. Officer Forcillo should have known that he was not allowed to use deadly force against a person posing no imminent threat.

The sentencing judge said he believes the six-year sentence "will serve to emphasize to other officers in executing their duties with respect to the discharge of their firearms that they do so only as a last resort ... and not as their first and only option."

That is all well and good, though it still leaves us with the troubling possibility that, had Officer Forcillo not fired that second volley of shots, he would have been exonerated, and left court a free man. And leaving aside the question of whether the shots that killed Sammy Yatim were murder, they were clearly not good policing. They were its antithesis.

The shooting was captured on a number of video cameras, and many in the public were left wondering why Officer Forcillo did so little to try to de-escalate the situtation. Instead, he almost immediately used lethal force on a teenager in an empty streetcar.

What was required that night was someone willing to try to calm a troubled, mentally disturbed teenager and talk him out of making a fatal mistake. Instead of backing up, slowing things down and trying to find a non-lethal way to deal with the situation, the officer issued comply-or-die orders.

The sentencing judge said Officer Forcillo's second round of shots constituted "a fundamental failure to understand his duty to preserve all life and not just his own." That should also be said of the first volley of shots.

Police officers sometimes have no choice but to take a life, in order to protect themselves and the public from mortal dangers. Their job is difficult, and it has become more so as they have to deal with a greater number of citizens suffering from mental illnesses.

But police officers and their leaders must examine whether their training is contributing to the escalation of confrontations.

Is police training geared too much toward officer protection through lethal force, and not enough to the kinds of tactics that can resolve a situation peacefully? That is the question raised by both volleys of shots fired at Mr. Yatim. Officers should only be drawing and using their firearms when they are faced with an imminent, potentially mortal threat.

More broadly, is police training overemphasizing use of force, fatal and otherwise, in situations where the average citizen, lacking the benefit of police training, would see that force is not called for? That is the question raised by cases like that of Robert Dziekanski, who was fatally jumped by four police officers at Vancouver International Airport. Faced with a confused man who didn't speak English, the officers immediately treated him as a suspect to be violently subdued.

Former Supreme Court judge Frank Iacobucci, in a report on the use-of-force tactics of the Toronto Police Service following the death of Mr. Yatim, said that police training should emphasize that, in situations involving troubled people, police "are usually required to play a helping role, not an enforcement role."

In Sammy Yatim's case, the first officer on the scene could have contained the situation and evaluated who and what he was dealing with. The situation cried out for that kind of expertise.

Instead, Mr. Forcillo escalated the tension by immediately pointing his weapon and getting in a yelling match with Mr. Yatim. We know the end of the story. 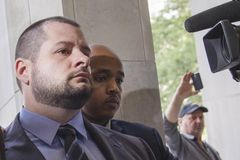