All elections are choices among imperfect alternatives, and this one more than most. Each of the parties has gaps, deficiencies and failings. But choose, voters must.

The election of 2015 has been powered by a well-founded desire for change. But it has also been an election where the opposition has recognized the electorate's desire for stability and continuity on all things economic. That's why the Liberals and the New Democrats, while running on the rhetoric of change, put forward economic platforms built largely on acceptance of the Conservative status quo.

The key issue of the election should have been the economy and the financial health of Canadians. On that score, the Conservative Party has a solid record. Hardly perfect but, relatively speaking, better than most. However, the election turned into a contest over something else: a referendum on the government's meanness, its secretiveness, its centralization of power in the most centralized Prime Minister's Office in history, its endless quest for ever more obscure wedge issues, and its proclivity for starting culture wars rather than sticking to the knitting of sound economic and fiscal stewardship. It turned this election into a referendum on the one-man show that has become the Harper government.

In an election about the economy, the Conservatives might have won, and would have deserved to. But thanks to the Harper government's own choices, this election has mostly not been fought on the Conservative Party's strong suit. Attention has instead been turned to the rotten culture of Mr. Harper's government.

The thing is, the other two major parties have so much respect for the Conservatives' record on economic, fiscal and tax policy that they propose to change almost none of it. Did Tom Mulcair's NDP run on a promise to raise income taxes? To massively increase spending? To run deficits? No, no and no. The NDP tax platform was, essentially, the Conservative Party's, plus a small increase in business taxes. The slogan may have been about "Change," but the platform was about trying to reassure voters that an Orange Wave would leave the Conservative economic status quo largely in place.

The Liberals have in one respect been slightly different from the NDP in offering change – their call for the federal government to spend more on infrastructure, financed by two years of small deficits, deviates from the Harper government brand (though not its record) of balanced budgets.

But leaving aside a few billion dollars' worth of extra borrowing, key planks in the Liberal economic platform were cribbed from the Conservative textbook. They promise to one-up the Conservatives, with a cut to the middle-class tax bracket, and one-up them again with an increase in benefits to families with children. To pay for this, they would raise taxes on the highest income earners, and similarly target family benefits to everyone but the rich.

But pushing marginal income tax rates on high-earners above 50 per cent in some provinces is likely to be counterproductive – promoting brain drain in a country that needs to attract the world's most talented people.

Over the course of this long campaign, Mr. Trudeau did well to market himself to the country. But beyond the selfies and the smiles, the substance has proved difficult to find. Mr. Trudeau's has been a skeletal vision and is therefore unpersuasive. With Ontario Liberal Premier Kathleen Wynne at his side, he would undoubtedly return to a bigger government footprint, and the spectre of waste and debt rears its ugly head. Who would apply the brakes if he is handed a majority? If he achieves minority government, Mr. Trudeau will need the NDP on critical economic issues to prevent his government's collapse. That, together with his inexperience as a leader, is a recipe for frailty.

This election should have been about jobs, taxes and the economy. This has been the Conservative Party's strong suit. But the Harper government pursued a multi-year plan of distracting voters from its accomplishments, focusing attention on its faults, pushing up the number of Canadians upset at it for reasons having nothing to do with their pocketbooks, and whittling down its supporters to an ever narrower base. Watching the self-immolating Harper government in action is to watch a tired group trying to shrink itself back to the old Reform Party. To the distress of the country and thinking Conservatives, it is succeeding.

Canada needs a change. It also needs the maintenance of many aspects of the economic status quo. What Canada needs, then, is a Conservative government that is no longer the Harper government.

It is not time for the Conservatives to go. But it is time for Mr. Harper to take his leave. He can look back on parts of his record with pride, but he has undone himself and his party with a narrowness of vision and a meanness of spirit on a host of issues, from voting rights to crime and punishment to respect for science to respect for the courts. The topper has been how this election campaign was sidetracked into an artificial, American-style, culture war over niqabs and "barbaric cultural practices." The spectacle of a prime minister seemingly willing to say anything, or demonize anyone, in an attempt to get re-elected has demeaned our politics. And while it may have firmed up the old Reform base, it also solidified the Harper Conservative Party as a party of, by and for that base.

The Conservatives have been a big tent party in the past, and they must be once again. Fiscally prudent, economically liberal and socially progressive – the party could be all of those things, and it once was. But it won't be, as long as Mr. Harper is at its head. His party deserves to be re-elected. But after Oct. 19, he should quickly resign. The Conservative Party, in government or out, has to reclaim itself from Stephen Harper.

The Globe's Editor-in-Chief held a Facebook Q&A on this endorsement earlier Friday. You can read it here. 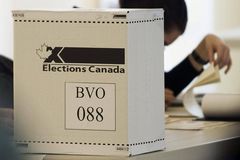 What makes the federal party leaders tick? Read The Globe’s leader profiles to find out
October 9, 2015 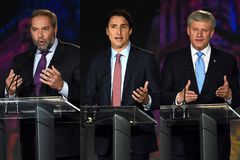