His first line of defence is the bald-faced lie, he is impervious to shame, he is either apologizing for something he said or saying something he is about to apologize for, and he has debased the office he holds. He is disingenuous, defensive and mean-spirited. His pose as a man of the people is utterly inauthentic. Some of his closest friends are, as they say, "known to police." He says demeaning things about women. He smoked crack while in office.

Other than that, it's been a pretty good year for Toronto Mayor Rob Ford. And he is well positioned to win re-election in 2014.

This is not a joke. Toronto will face an acid test of its character and its future in the 2014 municipal general election. Will it re-elect a polarizing mayor who divides the city along ideological and class lines? Or will it finally produce a pan-municipal candidate worthy of the diversity of diversities that makes up Toronto? In the 16 years since amalgamation, Toronto has never got its mayoral groove on, jumping from the clownish, populist furniture peddler Mel Lastman to the left-wing, Harvard-educated lawyer David Miller to the right-wing, elite-bashing problem child Mr. Ford. If voters re-elect Mr. Ford next October – current polling indicates this is possible – by the end of his term in 2018, the megacity will have suffered through two decades of inconsistent and frequently buffoonish leadership.

It is time for Toronto to grow up. The coming year should not be about unseating Mr. Ford at all costs, a temptation his opponents and voters may fall into; 2014 should be about finding a candidate for mayor who is able to transcend the tired downtown/suburbs and left/right divides that Mr. Ford exploits so gleefully and effectively, and which his predecessors failed to manage. Someone who has a vision for the entire city, who can transform the caustic effects of amalgamation with the alchemy of true city-building.

If Mr. Ford does win, it will be because people who are opposed to him failed to pay attention to the subliminal message his supporters are sending: Stop thinking of Toronto as the preamalgamation downtown city unto itself, with its aspirations to world-classness and its concentration of money and power, and start including its farther-flung, poorer, unhip neighbourhoods in the ongoing project of making Toronto a better place to live. The voters in Etobicoke and Scarborough who call the mayor's office about a broken elevator and then get a visit from Mr. Ford himself are not bedazzled by his charm; they are just impressed that someone knows they exist. It really shouldn't be up to the mayor of Canada's biggest city to act as head of public-housing maintenance; the fact that Mr. Ford can politically exploit this is evidence that these citizens believe that they can smell the indifference wafting from downtown.

Would they be happier with a less erratic and less divisive mayor, capable of doing the parts of the job that involve more than just "answering my phone calls"? Of course they would. Voters are far more likely to respond to the hope of a better city than they are to the stagnation of polarized politics, which is what Mr. Ford has been reduced to. He will never be able to give them much more than patronizing sound bites about "elites" and "the media," or maybe the odd $20 bill, delivered by his brother Doug.

The biggest disaster of the coming year, in municipal terms, would be for Mr. Ford's opponents to blithely throw their weight behind a candidate – any candidate – who is his deliberate opposite; a non-Rob Ford from one of the city's tonier neighbourhoods with well-polished establishment credentials. Two who come to mind are Olivia Chow, the MP, former city councillor and widow of Jack Layton, and John Tory, the 2004 mayoral candidate, former Ontario Conservative leader and current radio talk-show host. Both would be worthy candidates in many respects, but they have to realize that Mr. Ford will instantly define them as the surrogates of the downtown elites and accuse them of being handpicked by a conspiracy of wealthy, spoiled liberals whose sole goal is to return City Hall to a cabal of spendthrift gravy enthusiasts. It is simplistic and unfair and ugly, but would Ms. Chow or Mr. Tory be able to effectively counter it?

Toronto remains badly divided along income lines, by geography and by a sense that many voters have that their tax money isn't always efficiently or intelligently spent. That Rob Ford is himself an apostle of the creed of misspending – take a bow, Scarborough subway – and has thrown roadblocks in the path of a city-wide public transit plan that would benefit his constituents far more than his fiscally ludicrous "Subways! Subways! Subways!" mantra does not remove from his opponents the obligation to not only manage the city well, but to sell voters on the idea that they will. David Miller's missteps in the 2009 garbage strike, whose odour left citizens feeling like he wasn't on their side, helped to elect Mr. Ford.

Toronto needs to be rethought from its suburbs inward, not from its centre outwards. And its politics have to move beyond tired, left vs. right clichés. A candidate obviously tied to downtown is going to be suspect in the Rob Ford era, and not entirely unfairly. No mayoral candidate since amalgamation has offered voters a vision that is not either right vs. left, or rich vs. poor, or centre vs. suburb. The one who can in 2014 will be the one who has the best chance of finally putting Toronto on the right track. 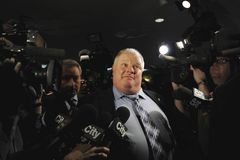 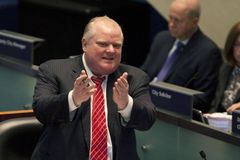 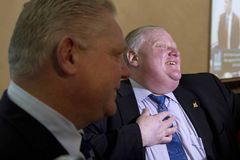