Simon Waldman is a visiting fellow at King's College London and the co-author of The New Turkey and Its Discontents.

As the death toll from Saturday night's terrorist attack on the Besiktas Vodafone stadium in Istanbul continues to mount, the Kurdistan Freedom Falcons (TAK) claimed responsibility. At least 41 people, of whom 30 were police officers, were killed in the double bombing. President Recip Tayyip Erdogan has vowed vengeance.

TAK is a splinter group of the Kurdistan Workers' Party (PKK), a separatist group considered a terrorist entity by the Canadian government.

Holding true to Mr. Erdogan's promise of vengeance, Turkey's retaliation against the PKK has been swift. On Sunday, Turkish fighter jets destroyed 12 PKK targets, including a command centre. Such operations are common occurrences against the PKK's bases in the Kandil mountains that straddle the border of Turkey and northern Iraq.

Although Turkey is in all-out war against the PKK, it has been unable to contain the conflict to the Kurdish southeast of the country. An earlier attack in February of this year bore similarities to Saturday's outrage. The PKK struck a police convoy in downtown Ankara killing 28 people. It took place in the same neighbourhood that houses Turkey's military headquarters as well as the country's parliament. One month later, the PKK again struck Ankara, this time taking the lives of 37 citizens.

Since the breakdown of the ceasefire between Ankara and the PKK in the summer of 2015, the Kurdish-populated southeast has descended into violence reminiscent of the dark days of the 1980s and 1990s, in which the Turkish-PKK conflict claimed the lives of around 40,000 citizens.

This return to violence is a deep disappointment. Back in 2009, Mr. Erdogan's ruling Justice and Development Party (AKP) spearheaded the "Kurdish Opening," which consisted of confidence-building measures such as a relaxation on restrictions on the use of the Kurdish language. This coincided with a secret dialogue between Turkey and the PKK in European cities.

However, these discussions were held while skirmishes, attacks and counterraids continued. Regardless, the talks soon bore fruit with a PKK ceasefire in 2013, and, on Feb. 28, 2015, there was a joint public appearance between the Turkish government and pro-Kurdish lawmakers in Istanbul in what became known as the Dolmabahce Agreement. However, this Turkish-Kurdish reconciliation was short-lived.

Ahead of Turkey's 2015 general elections, the pro-Kurdish and liberal-orientated Peoples' Democratic Party (HDP) was the target of several terrorist attacks by the so-called Islamic State, including the June, 2015, bombing of its campaign rally in Diyarbakir. The Kurds in the southeast protested, often violently, against Turkish authorities.

Many Kurds alleged that Turkey was either complicit in or turning a blind eye to the activities of IS both at home and across the border in Syria, where Kurds were facing an onslaught. In turn, the PKK declared an end to its ceasefire, especially after its targets continued to be hit by Turkey's air force. What ensued was the intensification of the conflict, with Kurds in some areas declaring self-rule while digging trenches and barricades to prevent security forces from entering.

The point of no return came on October, 10, 2015, when 103 people were killed in an Islamic State double-bombing attack in Ankara at another election campaign rally co-organized by the HDP, which still managed to cross Turkey's 10-per-cent election threshold to obtain seats in parliament.

The HDP's electoral success derailed Mr. Erdogan's move to push through parliament his plans for a presidential system giving him greater powers. Prioritizing political ambition over the prospect of peace, Mr. Erdogan sought the support of the ultraright Nationalist Movement Party (MHP), which was staunchly opposed to any kind of Kurdish dialogue. This alliance was compounded after last July's attempted coup, and, in the following months, Mr. Erdogan and the AKP worked closely with the MHP to draft constitutional changes, recently presented to parliament, that would give Mr. Erdogan his greater authority.

Meanwhile, last month leading members of the HDP were arrested on spurious charges of terrorism, dashing any hopes for peaceful Kurdish engagement with the state. On Monday, an additional 118 members were rounded up and arrested on terrorism charges.

The failed Kurdish talks were a missed opportunity. If successful, not only could they have lead to greater stability, but also to an understanding with the PKK's Syrian affiliate, the Democratic Union Party (PYD) and an alliance against their mutual enemy IS. Instead, Turkey now faces a two-pronged terrorist threat, one against the PKK and another against IS and the increasingly likelihood of the autocratic Mr. Erdogan gaining even more power. 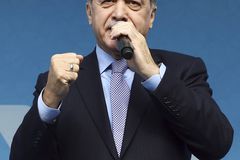 Opinion
Pushing back against populism
November 12, 2016
Follow us on Twitter @globedebate Opens in a new window
Report an error
Due to technical reasons, we have temporarily removed commenting from our articles. We hope to have this fixed soon. Thank you for your patience. If you are looking to give feedback on our new site, please send it along to feedback@globeandmail.com. If you want to write a letter to the editor, please forward to letters@globeandmail.com.
Comments