David Shribman is executive editor of the Pittsburgh Post-Gazette and a winner of the Pulitzer Prize for coverage of U.S. politics.

Perhaps the death of no one else in the United States would so profoundly transform the country as Saturday's sudden passing of U.S. Supreme Court Justice Antonin Scalia.

Justice Scalia, who died in Texas at 79, was perhaps the most important American jurist, and surely the most significant conservative court member, in generations. His death changes the balance of power in the United States' highest court even as it opens up a brutal political fight that already has engulfed the other two branches of government – and immediately set them against each other in a high-stakes, no-compromise confrontation that has few precedents in U.S. history.

But there is more. Justice Scalia's demise changes the rhythm and the themes of the presidential election. It deprives the conservative movement of one of its signature heroes and intellectual touchstones. It removes the leading proponent of "original intent" – the controversial doctrine that the U.S. Constitution should be interpreted through 18th-century eyes rather than through 21st-century perspectives – from court deliberations. And it eliminates one of the most innovative minds from American intellectual life.

Moreover – difficult to observe but impossible to ignore – the death of Justice Scalia changes the character of the Supreme Court, at once the most mysterious and most intimate of American institutions. Justice Scalia may have been the most conservative member of the court, but he was beloved by those who regarded him as their most trenchant and most intransigent sparring partner.

This avatar of conservatism was a constant holiday travelling companion and opera partner of Justice Ruth Bader Ginsburg, perhaps the most liberal member of the court. The two actually inspired an opera themselves called, inevitably, Scalia/Ginsburg, which had its premier last July at Lorin Maazel's Castleton Festival, though excerpts were performed earlier at the court itself. Mr. Scalia's opening aria includes the reprise line: "The justices are blind!"

Washington this week may be shrouded in genuine grief – even Democrats who bitterly blamed Justice Scalia for the court's verdict that Governor George W. Bush defeated Vice-President Albert Gore Jr. in the deadlocked, overtime election of 2000 mourned the passing of an original American mind – but the American capital already is riven with contentious debate.

President Barack Obama is determined to nominate a successor jurist who would shift the court balance to the left, affecting issues ranging from the future of Obamacare to the Obama ban on coal-fired power plants. Republicans on Capitol Hill and on the campaign trail in South Carolina, the latest staging ground for the remaining GOP pugilists, are just as determined to prevent him from prevailing.

These Republicans want the next president to choose the next justice, though there remain more than 10 months before the current Congress, where Republicans control the Senate and thus the confirmation process, expires. That is more than enough time, for in the past four decades these nominations and confirmations generally have taken fewer than three months to be resolved. In their debate Saturday night, Republican front-runner Donald Trump implored Senate Republicans to "delay, delay, delay," essentially running out the clock on Mr. Obama.

But if a Democrat wins the White House, the GOP strategy would bear little fruit, and could actually backfire.

If, for example, former secretary of state Hillary Clinton is elected, those same Republican senators could face the possibility that she nominates Mr. Obama himself to the court. As a former president and Senate colleague, Mr. Obama would be difficult to dismiss as unqualified. (He also is a graduate of Harvard Law School, was president of the law review there and he taught constitutional law.)

There is precedence here; eight years after William Howard Taft left the White House, President Warren Harding nominated him to be Chief Justice. He was confirmed that very day by a 60-4 vote in 1921.

By far the greatest influence of Justice Scalia – and by far the biggest loss resulting from his death – was the intellectual vigour he brought to strict constructionism and originalism, which enjoyed only limited appeal in American life until Justice Scalia infected it with vibrancy and passion.

Today, that view, once derided in liberal academic circles as the intellectual equivalent of creationism, has fresh relevance and respect – and is embraced, with enthusiasm and fervour, on the Republican hustings. And so in death, perhaps as much as in life, Justice Scalia is shaping the American political, social, cultural and intellectual landscape in a way that few others have done.

Flags at half-staff for Scalia, political fight heats up
February 14, 2016 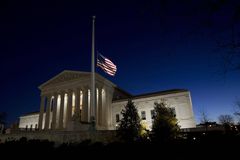