As the Belgians mourned their dead on Easter Sunday, Islamist fanatics carried out more bloodlettings. In Pakistan, at least 70 people were blown to smithereens by a suicide bomber at a local park in Lahore. His target was Christians – kids and their parents out to celebrate the Easter holiday.

Pakistan's Christian minority has long been targeted by Muslim extremists. The government seems powerless to stop the killings. A vicious Taliban splinter group claimed responsibility for this attack. "It's our message to the government that we will carry out such attacks again until Sharia Islamic law is imposed in the country," a spokesman said.

There was more blood in Glasgow. On Thursday, Asad Shah, a well-liked Muslim shopkeeper, was stabbed to death with a kitchen knife after he posted an Easter message "to my beloved Christian nation" on his Facebook page. Mr. Shah and his family belonged to the Ahmadiyya Islamic sect, which is widely loathed by other Muslim groups. His killer is thought to be a Muslim extremist.

Apologists for extremism like to argue that Islamists hate us for good reason. They attack

the West because of the awful things the West has done to them, and because Europe has miserably failed to integrate its Muslim population. But they also kill the infidels next door. It is clarifying to keep in mind that Islamist hatred is not confined to us. Its real motive is the logic of fanaticism.

In Pakistan, Christians are a despised minority in an increasingly theocratic state. Attacks on Christian churches have killed hundreds. Fear is part of their daily lives. Shahbaz Bhatti, the only Christian member of the cabinet, was murdered in 2011 after he spoke out against Pakistan's blasphemy law, which carries the death penalty for anyone who insults Islam. Punjab governor Salman Taseer, another high-profile politician, was gunned down by his own bodyguard after he defended a Christian peasant woman who was caught in a neighbourhood dispute and sentenced to death for blasphemy.

When the bodyguard, Mumtaz Qadri, was arrested and sent to jail, he was instantly hailed as a martyr and a hero by Sunni fundamentalists. The judge who sentenced him to death had to flee the country. After he was quietly executed a few weeks ago, as many as 100,000 people showed up at his funeral. This Sunday, the same day that Christians were being massacred in Lahore, thousands of Muslims rampaged through the capital of Islamabad to denounce the execution.

In Pakistan, religious extremism has spread like a virulent infection. "What do you do when the madness is not confined to radical mosques and madrasas, but is abroad among a population of nearly 200 million?" Salman Taseer's son, Aatish, wrote in The New York Times. Mr. Taseer argues that this form of radical Islam is neither medieval nor traditional, but something utterly new: a reaction against "the modernity that my father, with his condemnation of blasphemy laws and his Western, liberal ideas, represented."

Like Christians, Ahmadis in Pakistan are also treated with contempt. They are considered heretics by Sunni Muslims, and many have emigrated to the West to escape persecution. But now it's clear that persecution has followed them abroad. One anti-Ahmadi group in Britain sent out congratulations on Mr. Shah's murder.

Mr. Shah was a devout Muslim who was in love with his adopted land. Hundreds of people, including Scotland's first minister, attended a memorial service in his honour. His family has been overwhelmed with messages of support. But the police have told them to keep a low profile because of fears of retaliation. "We are scared for our lives," a family member told the Telegraph.

There's much more, of course. Sunni extremists have conducted killings in Indonesia, Turkey, Iraq and Pakistan, just to name a few. The number of people who kill is small. But the number of people who share their beliefs is larger than many of us would like to think. "In parts of the Muslim community a discourse has grown up which is profoundly hostile to peaceful co-existence," former British prime minister Tony Blair wrote recently. "Countering this is an essential part of fighting extremism."

Maybe Justin Trudeau should take note. Like it or not, we really are at war. It's a war of light against the dark. And last week, the dark was winning. 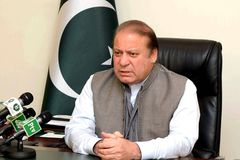 Opinion
Three European crises, and no threads to connect them
March 26, 2016

Opinion
A crumbling ‘caliphate’ is still a threat to Canada
March 23, 2016
Follow us on Twitter @globedebate Opens in a new window
Report an error Editorial code of conduct
Due to technical reasons, we have temporarily removed commenting from our articles. We hope to have this fixed soon. Thank you for your patience. If you are looking to give feedback on our new site, please send it along to feedback@globeandmail.com. If you want to write a letter to the editor, please forward to letters@globeandmail.com.
Comments