The singular tragedy of Ferguson, Missouri, in 2014, is that it is a story of plural tragedies.

The tragedy that Michael Brown, an unarmed black teenager, was shot at all. The tragedy that his body, bloodied from shots fired by a white police officer, was left in the street for four and a half hours. The tragedy that the episode, carrying all the tinder of unresolved American issues, was unaddressed for days by the leaders of American civic life. The tragedy that a nation that thought it had crossed an important barrier only six years earlier by electing a black president found itself burdened by the same familiar and fateful persistent divisions.

The tragedy that a culture pockmarked by race for half a millennium – since the first Africans were imported into colonial Virginia in 1619 – still bore its primeval strains, resentments and violent impulses.

And, of course, the tragedy that all those tragedies – every one of them avoidable – were not avoided.

For want of a nail the shoe was lost, and for want of a moment of thought – before the shots were fired, before the body was left to become a symbol, before the political leaders thought better of involvement, and so on – the soul of Ferguson, right there in the very middle of America, and part of the soul of the country that surrounded it, were lost.

All this was unnecessary and all this only underlined the resilience of ancient racial tensions and suspicions.

W.E.B. DuBois, the scholarly African-American social critic not known for playing down the durability of the racial issue, actually underestimated its resilience when he said that "the problem of the 20th century is the problem of the color line." Mr. DuBois, the first black to earn a doctorate from Harvard, was born in the last fortnight of the Andrew Johnson administration at the beginning of post-Civil War Reconstruction. He died the day before the landmark 1963 "I-have-a-Dream" March on Washington.

A mere four months prior to Mr. DuBois's death, the Rev. Martin Luther King, who was to become the unforgettable keynote speaker in front of the Lincoln Memorial, was arrested in Alabama during his 1963 Birmingham Campaign. Imprisoned in a primitive city cell, Mr. King composed his landmark "Letter from a Birmingham Jail". "Law and order," Dr. King wrote after his own conflict with police, "exist for the purpose of establishing justice and...when they fail in this purpose they become the dangerously structured dams that block the flow of social progress."

A 21st-century dam broke when Michael Brown was shot by a white policeman on Aug. 9, and another one broke Monday night when a St. Louis County grand jury did not indict Darren Wilson for Mr. Brown's death.

This episode is not over; racial incidents in America seldom are. There are fears of continuing violent anger – many protesters hurled batteries at police and set fires in the town. The violence might only be ameliorated by the country-wide comity and rhetoric of brotherhood that tends to envelop the United States over Thanksgiving, which is Thursday.

Two investigations still are underway, including one by the U.S. Justice Department, to determine whether the police department (94 per cent white) in that St. Louis suburb (exactly two-thirds black) has a history or culture of racial prejudice. It is scant progress that the justice department is part of Barack Obama's presidency and that the current and likely future attorneys-general are black. None of that prevented Ferguson.

This week Mr. Obama sought immediately to dampen tensions. Shortly after the grand jury issued its decision, the president, a onetime Constitutional law professor, pointed out that "we are a nation built on the rule of law," adding, "And so we need to accept that this decision was the grand jury's to make."

Even so, Ferguson is destined to take its place in a sad parade of American battlefields of race tension: Not only the Civil War battlefields of Antietam and Gettysburg but also the civil-rights battlefields of Scottsboro (1931), Greensboro (1960), Nashoba (1964), Selma (1965), Birmingham (1963) and Boston (1974).

With fires, and passions, still burning early Tuesday, Missouri Gov. Jay Nixon ordered fresh National Guard troops into Ferguson, city of tragedy. But the ultimate tragedy of Ferguson, Missouri, in 2014, is that it stands as vivid and livid proof that, as W.E.B. DuBois might put it, the problem of the 21st century is the problem of the color line. 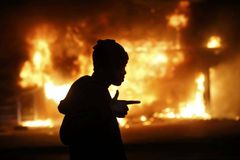